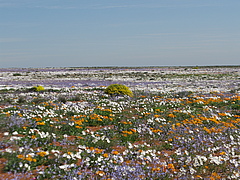 Most flowering plant species rely on pollinators to reproduce. This is true for the annual daisy species that dominate the spring mass flowering displays in South Africa. Species such as Gorteria diffusa, Dimorphotheca sinuata and Dimorphothecapluvialis are dependent on pollinators, such as the bee-flies pictured here, for seed production, and on seed for persistence in the system, making them vulnerable to pollinator decline. (Picture: Prof Alan Ellis/Stellenbosch University) 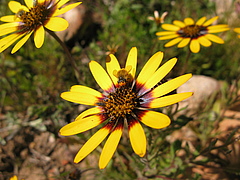 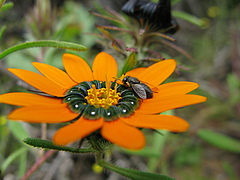 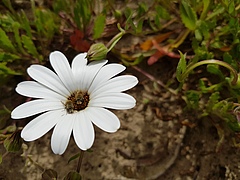 Stellenbosch, Konstanz, Leipzig.About 175 000 plant species – half of all flowering plants – mostly or completely rely on animal pollinators to make seeds and so to reproduce. This is the finding of a study conducted by a global research network with participation of the German Centre for Integrative Biodiversity Research (iDiv) and the University of Konstanz, recently published in the journal Science Advances. Declines in pollinators could therefore cause major disruptions in natural ecosystems, including loss of biodiversity.

Dr James Rodger, a postdoctoral fellow in the Department of Mathematical Sciences at Stellenbosch University (SU) and lead author, says, this is the first study to provide a global estimate of the importance of pollinators for plants in natural ecosystems.

The study, involving 21 scientists affiliated with 23 institutions from five continents, was led by Dr James Rodger and Prof Allan Ellis from Stellenbosch University (SU). It is a product of the Synthesis Centre for Biodiversity Sciences (sDiv) in the German Centre for Integrative Biodiversity Research (iDiv).

Prof Tiffany Knight, senior co-author, says, recent global assessments of pollination have highlighted a knowledge gap in our understanding of how tremendously plants rely on animal pollinators: “Our synthetic research addresses this gap, and enables us to link trends in pollinator biodiversity and abundance to consequences for plants at a global level.” Knight heads the Spatial Interaction Ecology research group at Martin Luther University Halle-Wittenberg (MLU), the Helmholtz-Centre for Environmental Research (UFZ) and iDiv.

While most plants are animal-pollinated, most of them also have a bit of auto-fertility. This means they can make at least some seeds without pollinators, for example by self-fertilisation. However, until this study, the question, “How important are pollinators for wild plants?” did not have a clear answer at the global level.

To address this problem, researchers at various institutions started to consolidate the information in databases: Dr Rodger developed the Stellenbosch Breeding System Database as a postdoctoral fellow in SU’s Department of Botany and Zoology; Prof Tiffany Knight, Prof Tia-Lynn Ashman and Dr Janette Steets led the sPLAT working group that produced the GloPL database; and Prof Mark van Kleunen and Dr Mialy Razanajatovo produced the Konstanz Breeding System Database. All three databases were combined in a new database for the current study. It includes data from 1 528 separate experiments, representing 1 392 plant populations and 1 174 species from 143 plant families and all continents except Antarctica.

The findings show that, without pollinators, a third of flowering plant species would produce no seeds and half would suffer an 80% or more reduction in fertility. Therefore, even though auto-fertility is common, it by no means fully compensates for reductions in pollination service in most plant species.

"Recent studies show that many pollinator species have gone down in numbers, with some even having gone extinct. Our finding that large numbers of wild plant species rely on pollinators shows that declines in pollinators could cause major disruptions in natural ecosystems,” Rodger warns.

Prof Mark van Kleunen from the University of Konstanz and a co-author of the study, says it is not a case of all pollinators disappearing: “If there are fewer pollinators to go around, or even just a change in which pollinator species are most numerous, we can expect knock-on effects on plants, with affected plant species potentially declining, further harming animal species and human populations depending on those plants. Pollinators aren’t only important for crop production, but also for biodiversity." “It also means that plants that do not rely on pollinators, like many problematic weeds, might spread even more when pollinators continue to decline,” he adds.

Dr Joanne Bennet, iDiv and MLU alumna and co-author from the University of Canberra who curated the GloOL database, says another disconcerting factor is the positive feedback loop that develops if pollinator-depending plants decline or go extinct: “If auto-fertile plants come to dominate the landscape, then even more pollinators will be negatively affected, because auto-fertile plants tend to produce less nectar and pollen.”

All is not doom and gloom, though, according to James Rodger. Many plants are long-lived, opening a window of opportunity to restore pollinators before plant extinctions occur from lack of pollinators. “We lack high quality long-term monitoring data on pollinators in Africa for example, including South Africa, although some work has been started in this regard. We hope that our findings will stimulate more of this kind of research, so that we can detect pollinator declines and mitigate their impacts on biodiversity,” Rodger concludes.