To understand future habitat needs for chimpanzees, look to the past 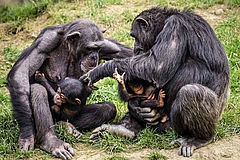 Chimpanzees are found as four subspecies in 21 African countries from the lowlands to mountainous regions of up to 2800 m altitudes. Their evolution was significantly shaped by the ice ages. (Picture: Pixabay)

Based on a media release by the Wildlife Conservation Society

Leipzig. A new study provides insight into where chimpanzees avoided climate instability during glacial and interglacial periods in Africa over the past 120,000 years. Using bioclimatic variables and other data, the international research team led by the German Centre for Integrative Biodiversity Research (iDiv), the Max Planck Institute for Evolutionary Anthropology (MPI-EVA) and Leipzig University (UL) identified previously unknown swaths of habitat, where chimps rode out the changes seen since the last interglacial period. The findings, published in the American Journal of Primatology, help to increase the understanding of how climate change impacts biodiversity, and how to mitigate against predicted biodiversity loss in the future.

For their analysis, the authors compiled over 130,000 occurrence records of chimpanzees (Pan troglodytes) stored in the A.P.E.S. database of the International Union for Conservation of Nature (IUCN) Species Survival Commission (SSC), as well as data from the Pan African Programme: The Cultured Chimpanzee (PanAf) at the MPI-EVA and iDiv.

The researchers quantified chimpanzee habitat suitability using species distribution models based on chimpanzee occurrences, climate and human density data, and then projected these models onto temporal snapshots of climate reconstructions at up to 1000 year intervals, dating back to the Last Interglacial period (120,000 years ago). For the first time, they were able to build a dynamic model of habitat suitability over time, permitting long-term stability (i.e. glacial refugia) to be calculated.

Results show that glacial refugia across Africa may have been underestimated for chimpanzees, with potentially up to 60,000 additional square kilometres (23,166 square miles) in the Upper and Lower Guinea Forests in West and Central Africa, and the Albertine Rift in East Africa. In addition, results provide explicit insights into chimpanzee habitat and how it may have shifted throughout time, enabling hypotheses of how global change has affected genetic and behavioural diversity to be tested in the future.

“By integrating past climate and human density estimates, as well as species richness of keystone tropical plants like figs and palms, this study provides strong evidence of glacial refugia for chimpanzees being geographically larger than previously thought, says the lead author of the study Dr Chris Barratt, a postdoctoral researcher at iDiv, MPI-EVA and UL. “It may well be that some of these refugia deserve greater levels of protection than they currently receive as they are important for the persistence of populations and species during periods of global change.”

The results provide a new resource for understanding patterns of genetic and behavioural diversity in chimpanzees. Chimpanzees exhibit highly differentiated genetic diversity, for example, lower in West Africa and higher in East and Central Africa, as well as high levels of behavioural differentiation based on the environmental variability they are exposed to, including Pleistocene forest refugia.

“We are only beginning to understand how past environmental changes have influenced the diversity in great apes we find today”, says the senior author of the study Dr Hjalmar Kühl, head of the Junior Research Group ‘Evolutionary and Anthropocene Ecology’ at iDiv and MPI-EVA. “A better understanding of these processes will tell us when variable environments serve as engines of diversification and when not. In the end, these insights into great apes will also offer insights into our own evolution.”

“To effectively conserve chimpanzees (and other species) over the centuries to come, it is essential to understand the past,” says Fiona Maisels of the Wildlife Conservation Society and a co-author of the study. “Humans are changing the planet’s climate and its habitats ever more rapidly. Approaches such as those used in this study are vital for predicting how these changes will affect future wildlife abundance and distribution, and to ensure space and safety for a multitude of species.”