The art of biodiversity 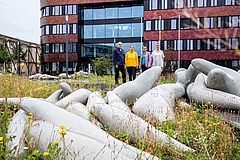 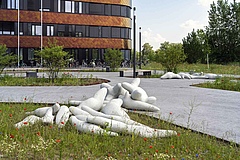 View of one of the figure groups on the forecourt of the iDiv building. (Picture: Kay Zimmermann / nachbars garten) 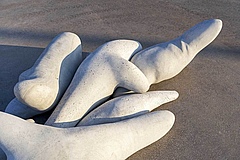 The recumbent groups of figures are made of self-compacting concrete. (Picture: Kay Zimmermann / nachbars garten) 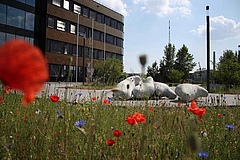 The space is an opportunity to raise public awareness of the research centre’s work. (Picture: Stefan Bernhardt / iDiv)

The new forecourt of the German Centre for Integrative Biodiversity Research (iDiv) in Leipzig invites us to discover, wonder and linger, and arouses interest in the research centre.

Leipzig. There is a new, public space in front of the German Centre for Integrative Biodiversity Research (iDiv) in Leipzig. Located in the entrance area to the Alte Messe old trade fair area, it was created as part of the art in public places Kunst am Bau competition organised by the Staatsbetrieb Sächsisches Immobilien- und Baumanagement (SIB) (Saxon State Land and Construction Management). The artist group nachbars garten and the landscape architecture firm Station C23 were awarded the contract for their joint concept named chorus. The space welcomes visitors with winding paths, flowering lawns and groups of rounded, fusiform figures. It invites you to discover, wonder and linger, and arouses interest in the research centre.

In front of the new iDiv research centre building on Puschstrasse in the Alte Messe area of Leipzig there is a group of peculiar, recumbent, fusiform figures made of concrete. Could these be seals, cells or seashells, or something completely different? You have to go down winding paths to get to them; paths with curves that look like bends in a river, but do they perhaps also resemble branches or roots? Between the paths there are grassy areas where flowers bloom red, yellow and blue. This new space is eye-catching and arouses curiosity - what is this interplay of shapes, colours and materials all about?

The key idea is diversity

The artist group nachbars garten - Elisabeth Howey, Enne Haehnle and Kay Zimmermann, won the State of Saxony’s art in public places Kunst am Bau competition in collaboration with landscape architect Michael Rudolph from Station C23. Their design ideas for the new research centre forecourt have become reality in recent months. As nachbars garten say, “Our interplay of nature and art is a feast for the visitor’s senses. The figures can be experienced in many ways; you can sit on them, touch them and explore the surfaces and spaces.” Because of the many possibilities of experiencing this space, the artists have called it chorus. The individual design elements should have an effect similar to that of a choir: multiple, diverse voices that can work both alone and together. “We chose round, intertwined, diverse shapes, colours and materials for the landscape design of chorus. This brings the space to life and enables the creation of a variety of impressions and moods,” adds Rudolph.

The space invites you to research

iDiv speakers Prof Henrique Pereira and Prof Nicole van Dam welcome the artists’ work; it is an opportunity to raise public awareness of the research centre’s work. Mr Pereira is a Research Group Leader at iDiv and Martin Luther University Halle-Wittenberg, and Ms van Dam is a Research Group Leader at iDiv and Friedrich Schiller University Jena. Both were part of the jury who decided on the submitted concepts. “The garden spaces use a mix of local native species which do not require irrigation. And the sculptures represent biodiversity of shapes, interactions and change in nature. Ultimately, this allows the visitor to guess what is happening in the building behind it and what issues the people in this building are dealing with,” says Pereira. Van Dam adds “I often see passers-by exploring the shapes. In this way, the forecourt to our building becomes an artistic invitation to the public to explore what we are doing.”

Nature and art in constant change

The recumbent groups of figures are made of self-compacting concrete. The surface of the concrete has pores and hollows resulting from the casting process where, in the coming years, lichen and moss will grow, and more plants will be able to establish themselves in the spaces between the sculptures. Over 40 native wild herbs were planted and sown in the grassy areas, and snowy mespilus and English oaks grow in between. These areas will also be allowed to develop naturally.

“The individual elements of the space are open and permeable; at the same time, they overlap and pervade each other,” says artist Elisabeth Howey. “Nature is an integral part of the design – here, nature and art can change together, and grow together and intertwine; nature becomes part of art and vice versa.” Through this project, the forecourt of the German Centre for Integrative Biodiversity Research (iDiv) can become a symbol of how humans change nature with artificially created structures and how nature then changes these structures. Both changes need to be experienced and explored.

Further information:
The newly designed forecourt is located in front of the German Centre for Biodiversity Research (iDiv) on the grounds of the Alte Messe – the former Leipzig Trade Fair area, on the corner of Zwickauer Strasse and Puschstrasse, directly at the tram stop An den Tierkliniken. An information pillar with details about the artwork will be placed on the forecourt within the next few days.