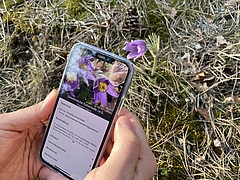 The Flora Incognita mobile app can help identify plants in the field. In addition, by gathering information on the locations of identified plant species, valuable datasets are created. (Picture: Jana Wäldchen / MPI-BGC)

Leipzig/Jena/Ilmenau. Mobile apps like Flora Incognita that allow automated identification of wild plants cannot only identify plant species, but also uncover large-scale ecological patterns. These patterns are surprisingly similar to the ones derived from long-term inventory data of the German flora, even though they have been acquired over much shorter time periods and are influenced by user behaviour. This opens up new perspectives for rapid detection of biodiversity changes. These are the key results of a study led by a team of researchers from Central Germany, which has recently been published in Ecography.

With the help of Artificial Intelligence, plant species today can be classified with high accuracy. Smartphone applications leverage this technology to enable users to easily identify plant species in the field, giving laypersons access to biodiversity at their fingertips. Against the backdrop of climate change, habitat loss and land-use change, these applications may serve another use: by gathering information on the locations of identified plant species, valuable datasets are created, potentially providing researchers with information on changing environmental conditions.

But is this information reliable – as reliable as the information provided by data collected over long time periods? A team of researchers from the German Centre for Integrative Biodiversity Research (iDiv), the Remote Sensing Centre for Earth System Research (RSC4Earth) of Leipzig University (UL) and Helmholtz Centre for Environmental Research (UFZ), the Max Planck Institute for Biogeochemistry (MPI-BGC) and Technical University Ilmenau wanted to find an answer to this question. The researchers analysed data collected with the mobile app Flora Incognita between 2018 and 2019 in Germany and compared it to the FlorKart database of the German Federal Agency for Nature Conservation (BfN). This database contains long-term inventory data collected by over 5,000 floristic experts over a period of more than 70 years.

The researchers report that the Flora Incognita data, collected over only two years, allowed them to uncover macroecological patterns in Germany similar to those derived from long-term inventory data of German flora. The data was therefore also a reflection of the effects of several environmental drivers on the distribution of different plant species.

However, directly comparing the two datasets revealed major differences between the Flora Incognita data and the long-term inventory data in regions with a low human population density. “Of course, how much data is collected in a region strongly depends on the number of smartphone users in that region,” said last author Dr. Jana Wäldchen from MPI-BGC, one of the developers of the mobile app. Deviations in the data were therefore more pronounced in rural areas, except for well-known tourist destinations such as the Zugspitze, Germany’s highest mountain, or Amrum, an island on the North Sea coast.

User behaviour also influences which plant species are recorded by the mobile app. “The plant observations carried out with the app reflect what users see and what they are interested in,” said Jana Wäldchen. Common and conspicuous species were recorded more often than rare and inconspicuous species. Nonetheless, the large quantity of plant observations still allows a reconstruction of familiar biogeographical patterns. For their study, the researchers had access to more than 900,000 data entries created within the first two years after the app had been launched.

The study shows the potential of this kind of data collection for biodiversity and environmental research, which could soon be integrated in strategies for long-term inventories. “We are convinced that automated species recognition bears much greater potential than previously thought and that it can contribute to a rapid detection of biodiversity changes,” said first author Miguel Mahecha, professor at UL and iDiv Member. In the future, a growing number of users of apps like ‘Flora Incognita’ could help detect and analyse ecosystem changes worldwide in real time.

The Flora Incognita mobile app was developed jointly by the research groups of Dr. Jana Wäldchen at MPI-BGC and the group of Professor Patrick Mäder at TU Ilmenau. It is the first plant identification app in Germany using deep neural networks (deep learning) in this context. Fed by thousands of plant images, that have been identified by experts, it can already identify over 4,800 plant species.

“When we developed Flora Incognita, we realized there was a huge potential and growing interest in improved technologies for the detection of biodiversity data. As computer scientists we are happy to see how our technologies make an important contribution to biodiversity research,“ said co-author Patrick Mäder, professor at TU Ilmenau.

This study was financed inter alia by the Deutsche Forschungsgegemeinschaft (DFG; FZT-118) as part of iDiv’s Flexpool funding mechanism. The Flora Incognita project is jointly funded by the Federal Ministry of Education and Research (BMBF), the Federal Agency for Nature Conservation (BfN) and the Thuringian Ministry for the Environment, Energy and Nature Conservation. It spans a bridge between science, the general public and the government authorities.