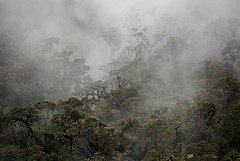 Pristine and unmanaged forests like at Cotapata National Park in Bolivia are home to a larger number of beetles than plantations. (Picture: Gabriela Villanueva) 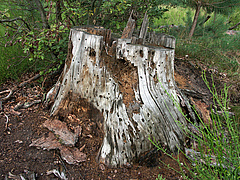 Dead wood is an important habitat for many plants and animals, including the larvae of Chalcophora mariana. (Picture: Christoph Benisch – www.kerbtier.de) 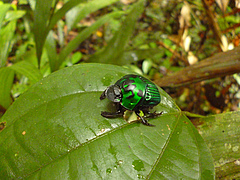 Beetles are essential for a variety of processes in nature, such as this dung-beetle (Oxysternon aff. conspicillatum) feeding on excrement in the Bolivian tropical forest. (Picture: Jaime Rodriguez)

Plantations are home to significantly less beetles than old-growth forests.

Leipzig/Jena/Halle. Tree plantations are supposed to help compensate the loss of pristine forest habitats. However, their contribution to biodiversity conservation is limited: For example, plantations host a significantly lower number of beetle species as well as individuals than old-growth forests. This was found by a global analysis published in Forest Ecology and Management and led by the German Centre for Integrative Biodiversity Research (iDiv), Friedrich Schiller University Jena (FSU) and Martin Luther University Halle-Wittenberg (MLU).

In light of declining natural forests, tree plantations may seem like a good way to replace forest habitats. But what are the possible benefits of these plantations for biological diversity? A team of researchers led by iDiv, FSU and MLU investigated this question using the example of beetles. Beetles account for 27% of all insect species worldwide and are often used as indicators for the effects of climate change and habitat fragmentation on biodiversity. In forest, they serve important functions – for example, they contribute to the decomposition of plant and animal biomass, making the nutrients stored inside of this biomass available to plants.

For their research, the scientists analysed 83 published studies on beetle diversity in tree plantations and old-growth forests. “Of course, the benefit of plantations always depends on the planted tree species,” said Dr. Silvia Gallegos from MLU, one of the lead authors of the paper. “Mixed cultures are better than monocultures and native species are better than exotic species.” In general, the global analysis showed significant differences in the beetle diversity of plantations and forests. In average, tree plantations were home to one third fewer species than old-growth forests and hosted about half as many individuals.

Furthermore, the researchers found major differences in the composition of beetle communities in plantations and forests. Even tree plantations with a similar number of beetle species and individuals as old-growth forests still displayed a significant difference in species composition. Beetle species that feed on dead organic substances were particularly affected, which might be due to less diverse food resources offered by plantations. Species that feed on other insects were also less common. “This indicates that plantations are home to fewer predators. Old-growth forests might, thus, be more resistant to herbivores and pests than artificial tree plantations,” said last author Dr. Stephan Kambach from MLU and iDiv.

With their study, the researchers show that tree plantations, in particular when planted in mixed cultures – might provide an important tool to minimize habitat loss of forest-adapted species. “However, tree plantations can neither sustain the diversity nor the composition of beetle communities of old-growth forests, limiting their value for forest conservation,” said first author Georg Albert from iDiv and FSU.

The study was inspired by an iDiv Summer School in 2017, including intensive training in meta-analysis and hands-on synthesis work on genuine research projects. The iDiv Summer School takes place every year with different foci and is attended by young scientists from all over the world.

This research was, amongst others, funded by the DFG - Deutsche Forschungsgemeinschaft (FZT-118).

Original publication
(Scientists and alumni with iDiv affiliation in bold)