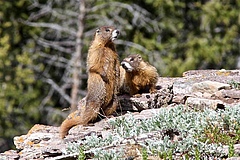 Especially in regions that are particularly affected by climate change, studies are often missing, for example in the mountains. The American yellow-bellied marmot is one of the few mammals for which the researchers were able to find relevant data. (Picture: Ben Hulsey)

Even with well-studied species groups such as mammals, there are huge data gaps

Based on a press release by the British Ecological Society

Zurich/Leipzig. A new scientific review has found there are significant gaps in our knowledge of how mammal populations are responding to climate change, particularly in regions most sensitive to climate change. The study was initialised through sDiv, the synthesis centre of the German Centre for Integrative Biodiversity Research (iDiv), involving researchers from the University of Zurich, the Martin Luther University Halle-Wittenberg (MLU), the Helmholtz Centre for Environmental Research (UFZ) and others. The findings are published in the Journal of Animal Ecology.

Nearly 25% of mammal species are threatened with extinction, with this risk exacerbated by climate change. But the ways climate change is impacting animals now and projected to in the future is known to be complex. Different environmental changes have multiple and potentially contrasting, effects on different aspects of animals’ lives, such as reproduction and survival (known as demographic rates). A new review by a global team of researchers from 15 different institutions has found that most studies on terrestrial mammals only looked at one of these demographic rates at a time, potentially not showing the full picture of climate change impacts.

Initialised through iDiv’s synthesis centre sDiv, the researchers performed a literature review, using the species names of 5,728 terrestrial mammals. The aim was to search databases of scientific papers for studies that quantified the relationship between demographic rates and climate variables, such as rainfall and temperature. They found only 106 studies that looked at both survival and reproduction at the same time. This covered 87 species and constitutes less than 1% of all terrestrial mammals.

“Researchers often publish results on the effects of climate on survival or reproduction – and not both. But only in rare cases does a climatic variable (say, temperature) consistently negatively or positively affect all studied rates of survival and reproduction,” said lead author Dr Maria Paniw, who conducted the study at the University of Zurich. Today she works in Spain. For example, higher temperatures could decrease the number of offspring, but if the offspring have a better chance of survival because of less competition, the population size won’t necessarily be affected. On the other hand, if higher temperatures decrease both reproduction and survival, a study of only one of these could underestimate the effects on a population.

The review also found a mismatch in the regions where studies on climate change impacts on mammals were taking place and regions recognised as being the most vulnerable to climate change. For example, hardly any data could be obtained from higher elevations. The researchers also raise concerns that there are even bigger data gaps for animal groups that are less well studied than terrestrial mammals, such as insects and amphibians. This data is urgently needed to inform which species are most vulnerable to climate-driven extinction.

This research was, among others, supported by the Deutsche Forschungsgemeinschaft (DFG; FZT-118). It is a product of the sDiv working group sAPROPOS. iDiv’s synthesis centre sDiv supports working group meetings where international scientists work together on scientific issues.