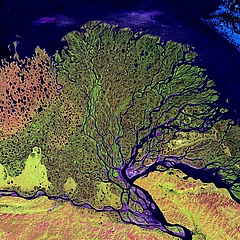 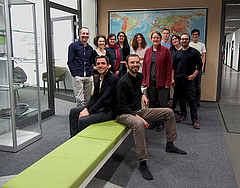 Trento/Leipzig/Seattle. The conservation and restoration of highly branched river courses can help to curb the extinction of fish species. This is the result of an international working group led by Edmund Mach Foundation and with participation of the German Centre for Integrative Biodiversity Research (iDiv) and the Friedrich Schiller University Jena (FSU), supported by iDiv’s synthesis centre sDiv. The researchers found that temporal synchrony in the abundance of freshwater fish populations can be predicted directly from the branching complexity and connectivity of river networks. Synchronous fluctuations in the size of different populations of a species at different locations in a river significantly increase the probability of extinction. As species are lost from freshwaters faster than in any other ecosystems, knowledge of fundamental patterns in their spatial and temporal dynamics can inform conservation strategies both now and in the future. The study was recently published in Ecology Letters.

In order to reveal the causes, dynamics and consequences of synchrony in population fluctuations, an international working group of scientists from eleven Countries, gathered in Leipzig to collaborate and leverage the most comprehensive dataset on long-term stream fish time-series. River ecosystems are well recognised as being distinct from most other spatially structured habitats, because organismal movement is constrained by the dendritic network. This poses unique challenges that the working group tackled by combining simulation models and geo-statistical approaches.

Theoretical predictions of how fish population synchrony decays with distance across the river basin were derived from a metacommunity model reproducing the geometry of river networks. “The challenge was to tailor our model to simulate dispersal within a dendritic network while also taking into account the directionality of water flow”, says Dr Remo Ryser. The postdoctoral researcher, affiliated to iDiv and FSU, developed the model together with Dr Claire Jaquet from the French National Institute for Agriculture, Food, and Environment (INRAE) and Prof Ulrich Brose, head of the research group Theory in Biodiversity Science at iDiv and FSU.

The team then compared theoretical expectations with the empirical data, including more than 34.000 pairs of fish populations representing 48 fish species across Europe. Lead author of the study Dr Stefano Larsen from the Edmund Mach Foundation says: “I was delighted to see how closely the empirical spatial patterns in population synchrony matched our theoretical expectations.”

Results indicate that synchrony is higher between fish populations connected by direct water flow, and decays faster with distance along the straight-line “as the crow flies” than the watercourse “as the fish swims” dimension. Moreover, as expected from network theory, synchrony decays faster with distance in the marginal headwaters compared to the more connected mainstem populations of the same river basin.

“Our work reveals that river network geometry and the direction of water flow are fundamental drivers of spatial patterns in fish population synchrony,” explains Julian Olden, professor of freshwater ecology at the University of Washington who – together with professor Lise Comte from Illinois State University – led the interdisciplinary working group. According to both empirical and theoretical findings, this study shows that temporal synchrony in the abundance of fish populations can be buffered as a direct consequence of network branching complexity.

”The challenge of studying the dynamics of populations in complex habitats such as river networks also offers great opportunities. Our study sheds light on the geography of population synchrony allowing the prediction of key patterns even in the absence of empirical populations time series,” Stefano Larsen further explains.
“These findings have implications for the persistence and management of species in river networks that support high biodiversity, but are among the most threatened ecosystems globally.”

This research was, among others, supported by the Deutsche Forschungsgemeinschaft (DFG; FZT-118). It is a product of the sDiv working group sYNGEO. iDiv’s synthesis centre sDiv supports working group meetings where international scientists work together on scientific issues.