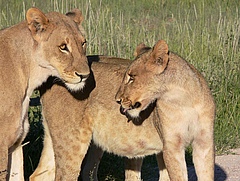 Wildlife watching can be highly an emotional and educational experience. While scientific studies up to the year 2000 examined solely negative effects of interactions between humans and wild animals, more and more analyses now capture the positive effects on humans. (Picture: Jula Zimmermann)

Leipzig, Frankfurt. Non-material contributions of wildlife (WCP) to human well-being are gaining attention in the scientific literature. Whereas until the end of the 20th century only negative evaluations such as health hazards were mentioned, the focus on positive influences on physical and mental health as well as on culture aspects are now becoming increasingly popular in research. These are the main findings of a new study conducted by scientists at the German Centre for Integrative Biodiversity Research (iDiv), Senckenberg Biodiversity and Climate Research Centre (SBiK-F) and Goethe University Frankfurt. The study was published in Environmental Research Letters.

For many people, interactions with wildlife are part of their daily lives. For example, bird feeding is a popular activity in many households and people enjoy watching wild animals when they spend time in nature. People are also willing to travel far to see rare or charismatic species. However, wildlife encounters do not only create positive experiences for people. In many countries, wildlife is rather connected to conflicts and danger. Especially larger mammal species, for instance, can not only cause economic damage but also harm people. In this literature review, the researchers focused on summarizing studies on such positive and negative contributions of wildlife to human well-being.

They reviewed literature – 277 studies published between 1940 and 2019   of these so-called non-material contributions of wildlife for four wildlife taxa: mammals, birds, reptiles and amphibians. Non-material contributions of wildlife affect the immaterial or intangible dimensions of human well-being such as physical or psychological health, learning and inspiration, spirituality or people’s identities.

In their review, the authors found that the number of studies addressing issues of wildlife and human well-being have been rising over the past decades. The majority of published articles report negative WCP. This is especially true for almost all studies published before the year 2000. Since then, research on positive WCP has been increasing, especially in the Global North (e.g. Europe, North America).

The researchers could not find any joint assessments of positive and negative wildlife contributions for any wildlife taxa. “This is surprising since many wildlife species can have both, positive and negative WCP,” says Joel Methorst. For example, some large carnivores (e.g. lions, tigers) are charismatic and popular among tourists, but can be dangerous to local people living in the area (e.g. farmers). Likewise, many birds are enjoyed by people because of their songs, however, some birds are also considered a nuisance (e.g. doves or seagulls).

Most studies focused on either positive or negative WCP and often the effects were only examined for a single dimension of human well-being. Many of the negative WCP were related to physical health and caused by mammals or reptiles injuring or harming people. Positive WCP comprised wildlife experiences leading to beneficial effects on human psychological health, positive emotions, inspiration, spirituality or learning experiences. Many positive effects on psychological health were associated with birds. Future studies should jointly evaluate positive and negative WCP and examine multiple dimensions of human well-being to obtain a more balanced and comprehensive understanding of the human-wildlife relationship.

In addition, the scientists also looked at the different ways how people might experience wildlife. For this purpose, they categorized each reported case of human-wildlife experiences according to four channels: Interaction, Living Within, Perceiving and Knowing. Interaction describes multisensory experiences where people physically interact with wildlife (e.g. hunting or feeding wild animals), Living Within defines the everyday, conscious or subconscious, contact with wildlife in areas in which a person lives, Perceiving is the remote sensory interaction with wildlife (e.g. seeing, smelling, touching, hearing), and Knowing describes the metaphysical connection between humans and wildlife that arises through thinking or remembering). Interaction and Knowing were most often reported in the literature while Living Within was least often studied.

“The various influences on the scientific assessment concepts are not yet well understood. So, future research should examine potential drivers and motivations behind research questions,” says Joel Methorst.

The publication was made possible by the iDiv Open Science Publication Fund "Flexpool".