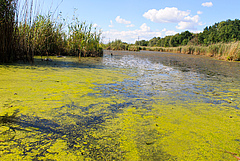 So-called "algal blooms" are the result of a nutrient entering the aquatic system, e.g. a lake, and causing excessive growth of algae. (Picture: Adobe Stock) 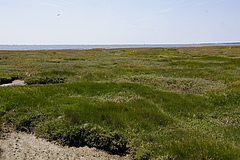 A salt marsh is a natural coastal ecosystem between land and sea. (Picture: Monika Feiling)

Based on an media release of Carl von Ossietzky University Oldenburg

Oldenburg/Leipzig/Halle. Many policies tackling the consequences of global environmental change rely on the concept of tipping points: If an impact, such as biodiversity loss, becomes too large, an ecosystem might flip into a different often less desirable state. However, a new study published in Nature Ecology and Evolution and led by an international team of scientists from the University of Oldenburg, the German Centre for Integrative Biodiversity Research (iDiv) and other research institutions finds little evidence for thresholds. When focussing on tipping points, scientists and policy makers may thus risk overlooking the negative impact of gradual changes on ecosystems – with potentially disastrous consequences.

Over the past years, many ecological case studies have been published that indicate the tipping behaviour of ecosystems. For example, coral reefs may switch into an algae-dominated stage if eutrophication is large enough to reduce the proportion of corals. The idea of using a threshold as an indicator of ecosystem change to a pressure is analogous to set of warning lights: so long as the light is green things are ok, but a yellow light would be a warning that the system is about to change to an undesirable state (red light). This is why policy makers increasingly rely on thresholds to draft strategies for sustainably safeguarding ecosystems. But what if we wait for the yellow light – but it does not exist? This might mean we do not notice the gradual transitioning of the green light towards red.

The team of researchers therefore wanted to find out whether threshold levels can be identified from available environmental data at all or, even better, whether they can be predicted for different drivers of environmental change. “In order to develop environmental policies we need a general guideline,” says Prof Dr Helmut Hillebrand, director at the Helmholtz Institute for Functional Marine Biodiversity at the University of Oldenburg and iDiv Member. “But the problem is, that thresholds might be hard to detect in natural ecosystems when the anthropogenic change hasn’t been large enough yet. And we can’t determine thresholds for each process in each ecosystem.”

To get a better overview of how ecosystems respond to change, the scientists turned to experimental data derived from already published synthesis efforts that look at the consequences of present-day but also future pressures, such as increased CO2 or nutrient levels. They also assessed the functional responses of the ecosystems, such as changes in the cycling of elements or the production of biomass. In total the authors used information from 36 meta-analyses, which cover 4601 unique field experiments on natural or close-to-natural ecological communities.

Based on this data, the authors calculated how strongly a system responded to pressure and tested whether the magnitude of response related to the strength of pressure. If there was a certain amount of pressure where extraordinarily strong responses started to occur, this would then indicate the presence of thresholds.

“The results of this analysis were stunning,” says Hillebrand. Whereas the vast majority of the 36 meta-analyses found that the strength of pressure affected the response magnitude, only very few (3 out of 36) showed statistical evidence for threshold transgression. However, the fact that thresholds did not emerge could still mean two things: The thresholds are either truly absent or they exist but remain undetectable by the statistical approach applied for this study.

“But if they are hard to measure, then even when they exist, they may be a poor indicator to use for telling when an ecosystem is in trouble because there are many ways that ecosystems can change in undesirable ways that do not have a clear threshold,” says Prof Dr Stan Harpole, head of Physiological Diversity at iDiv and UFZ and professor at MLU. “This is what our study showed: that thresholds were not easily detectable but that most of the ecosystem responses to pressures were large.”

The statistical analyses of the data demonstrate that responses to even the smallest change can be large. “If we wait to see clear tipping points in response to any of the major human-induced environmental changes such as warming or biodiversity change, we risk overlooking the small gradual changes which sum up to a shifting baseline over time, that is a shift in the perception of what a healthy ecosystem looks like,” Hillebrand adds. In his view, scientists and policy makers should therefore rather focus on the size and lifetime of random fluctuations and their possible consequences to be able to act according to the precautionary principle.