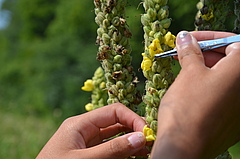 A pollen supplementation experiment where a naturally pollinated flower is compared to a hand-supplemented flower. (Picture: Amibeth Thompson) 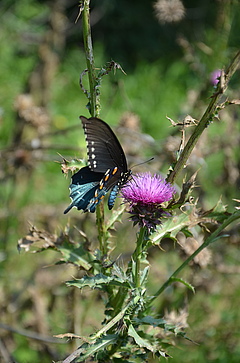 Leipzig/Halle. Human changes to the environment have been linked to widespread pollinator declines. New research published in Nature Communications shows that intensive land use will further decrease pollination and reproductive success of wild plants, especially of those plants that are highly specialised in their pollination. An international team of scientists led by researches from the German Centre for Integrative Biodiversity Research (iDiv), Martin Luther University Halle-Wittenberg (MLU) and the Helmholtz Centre for Environmental Research (UFZ) performed a global data analysis that provided conclusive evidence of the links of human land use and pollination of plants.

Plants provide resources including food and shelter to all other living organisms on earth. Most plants need pollinators to reproduce, which is why mounting research showing widespread pollinator declines is concerning. Despite concerns we are facing a pollination crisis, we do not know which types of plants will be most affected by pollinator declines and under which conditions declines in plant reproductive success are to be expected.

Changes in land-use are the leading threat to plants and pollinators. However, different groups of pollinators may have different responses to changes in land-use. For example, some farming practises may increase honeybee abundance on the one hand but reduce the abundance of other pollinators such as wild bees and butterflies on the other hand. Dr Joanne Bennett, who led the research as a postdoctoral researcher at iDiv and MLU and is now working at the University of Canberra, said: “Plants and their pollinators have evolved relationships over millions of years . Humans are now changing these relationships in just a few years.”

A global data set on land use and pollen limitation

To link land use to pollen limitation, an international team of researchers set out to compile a global dataset that quantified the degree to which pollen limits plant reproductive success. For this, they analysed thousands of published pollen supplementation experiments – experiments that estimate the magnitude of pollen limitation by comparing the number of seeds produced by naturally pollinated flowers with flowers receiving hand supplemented pollen. Joanne Bennett said: “If naturally pollinated plants produce less fruits or seeds than plants of that have received additional pollen by hand then the reproduction of that plant population is limited – this is called pollen limitation. In this way, pollen limitation experiments provide an unparalled opportunity to link plant reproductive function to the health of pollination services.”

It was almost 20 years ago when Prof Dr Tiffany Knight, Alexander von Humboldt professor at MLU and head of the Spatial Interaction Ecology research group at iDiv and UFZ, started to compile the first data sets. Supported by iDiv’s synthesis centre sDiv, Knight and Bennett took the project to a new level by forming a group of 16 experts from all over the world to expand the dataset and generate new ideas. The researchers started with 1,000 experiments on 306 plant species from Europe and North America. To date, it includes data from over 2,000 experiments and more than 1,200 plants and has a more global distribution. Tiffany Knight said: “One of the most rewarding components of this research has been the collaboration with the international team, and the inclusion of studies published in languages other than English.”

Ultimately, this data allowed for a global meta-analysis, which showed that wild plants in intensely used landscapes, such as urban areas, are highly pollen limited. The researchers found that plants that are specialized in their pollination are particularly at risk of pollen limitation, but this varies across the different land-use types and is based on which pollinator taxa they are specialized on. For example, plants specialised on bees were less pollen limited in agriculturally managed lands than those specialized on other pollinator types. This could be because domesticated honey bees support the pollination of wild plants in these lands.