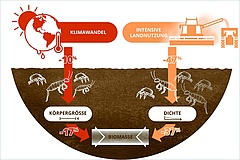 Soil animals like this moss mite (Oribatida) belong to the important group of decomposers. Their reduced number and biomass in the future is likely to have an adverse effect on the decomposition performance of the animals, which will result in slower nutrient recycling.  (Picture: Andy Murray)

As a result of climate change, soil animals are getting smaller, and their numbers are falling due to intensive land use

Nowadays, life in the soil must contend with several problems at once. The biomass of small animals that decompose plants in the soil and thus maintain its fertility is declining both as a result of climate change and over-intensive cultivation. To their surprise, however, scientists from the Helmholtz Centre for Environmental Research (UFZ), the German Centre for Integrative Biodiversity Research (iDiv) and Leipzig University have discovered that this effect occurs in two different ways: while the changing climate reduces the body size of the organisms, cultivation reduces their frequency. Even by farming organically, it is not possible to counteract all negative consequences of climate change, the researchers warn in the trade journal eLife.

Largely unnoticed and in secret, an army of tiny service providers works below our feet. Countless small insects, arachnids and other soil dwellers are indefatigably busy decomposing dead plants and other organic material, and recycling the nutrients they contain. However, experts have long feared that these organisms, which are so important for soil fertility and the functioning of ecosystems, are increasingly coming under stress.

On the one hand, they are confronted with the consequences of climate change, which challenges them with high temperatures and unusual precipitation conditions with more frequent droughts. On the other hand, they also suffer from over-intensive land use. If, for example, a meadow is turned into a field, soil animals find fewer niches and food sources there. Intensive ploughing, mowing or grazing, as well as the use of pesticides and large amounts of fertilizer also have a negative effect. But what happens when soil life is faced with both challenges at the same time? “Until now, we knew almost nothing about this,” says Dr Martin Schädler from the UFZ, who is member of iDiv.

But he and his colleagues at the UFZ and iDiv have very good opportunities to pursue such complex questions. The ecologist coordinates the “Global Change Experimental Facility” (GCEF) in Bad Lauchstädt near Halle. There, researchers can simulate the climate of the future on arable and grassland plots used with varying degrees of intensity. In large steel constructions reminiscent of greenhouses without a roof or walls, they recreate a scenario that could be typical for the region between 2070 and 2100: it is about 0.6 degrees warmer than today, in spring and autumn there is ten percent more precipitation and summers are about 20 percent drier. A team led by Martin Schädler and well as doctoral student Rui Yin (UFZ) with participation of Prof Nico Eisenhauer and Julia Siebert from iDiv and Leipzig University has now investigated how these conditions affect mites and springtails. Both groups have many decomposers in their ranks, which play an important role in the nutrient cycles in the soil.

The results show that these soil animals are likely to dwindle even further due to climate change. “It is likely that not only smaller species will prevail, but also smaller individuals within the same species,” says Schädler. In any case, the examined specimens on the areas with higher temperatures and changed precipitation were on average about ten percent smaller than on the comparable areas with today’s climate. Biologists have so far been familiar with such connections between body size and climate primarily in larger animals. For example, bear species in warm regions of the Earth are significantly smaller than the polar bear found in the Arctic. This is due to the fact that a small body has a comparatively large surface area over which it can release heat - which is an advantage in the tropics, but easily leads to cooling in polar regions. In poikilothermal animals such as insects, high temperatures also stimulate metabolism and developmental speed.

This creates new generations faster, but they remain smaller,” explains Martin Schädler. If the mites and springtails from the plots with an altered climate are weighed, the total weight is therefore lower in comparison with those from the unaffected areas. But this is not good news. After all, these animals’ decomposition performance also depends on this biomass. Less total weight therefore also means that nutrient recycling is slowed down. According to the experiment, over-intensive land use can also trigger a very similar effect. This is because the biomass in the soil also decreases as a result. “Interestingly, however, there is another process behind this,” says Martin Schädler, summarising the most important result of the study. “Unlike the climate, use does not reduce the size of the animals, but their density.” For example, around 47 percent fewer mites and springtails lived on GCEF plots cultivated conventionally compared with plots extensively used as meadows.

“The fascinating and sobering thing about it is that the effects of climate and use hardly influence each other,” says the ecologist. Until now, many experts had hoped that eco-friendly agriculture could offer some kind of insurance against the negative consequences of climate change. After all, organic farming generally leads to a more diverse community in fields and grassland. However, it is thought that this makes such ecosystems less susceptible to climatic disturbances than conventionally used areas.

Yet when it comes to maintaining the performance of soil animals, this strategy does not seem to work: changes in temperature and precipitation reduce their biomass regardless of cultivation. “So not everything that threatens to break down as a result of warming can be saved by environmentally friendly land use,” says Schädler in summary. In order to mitigate the consequences of climate change, it is therefore necessary to tackle greenhouse gases directly - and as quickly as possible. “We can’t assume that we’ll come up with anything else.”