How many invasive species can our ecosystems tolerate? 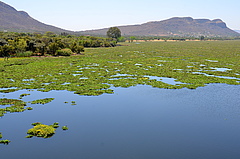 Water hyacinth (Eichhornia crassipes) invasion in the Hartbeespoort reservoir in South Africa. Introduced as an ornamental plant it has become invasive across all continents except Antarctica. The plant alters local water flow, community composition and provides habitats for mosquitos that act as a major vector of diseases (Picture: Olga Ernst, CC BY-SA 4.0) 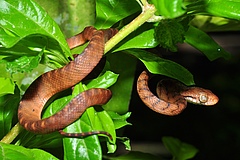 The Brown tree snake (Boiga irregularis) has been introduced accidentally via commodity transportation to several islands globally. It threatens native species by predation and is responsible for several local extinctions of species in its invaded range. (Picture: Pavel Kirillov, CC BY-SA 4.0)

Based on a press release by the University of Vienna

Even an increase in invasive alien species by 20 to 30 percent will lead to a dramatic global loss of biodiversity in the future. This is the conclusion of a study conducted by an international team of researchers led by the University of Vienna with contributions from the German Centre for Integrative Biodiversity Research (iDiv) and the Helmholtz Centre for Environmental Research (UFZ). The current increase is mainly driven by the global transport of goods, climate change and the extent of economic growth. The study was published in the journal Global Change Biology.

Human activities intentionally and unintentionally introduce more and more species to new regions of the world - for example, via commodity transport or tourism. Some of these alien species have negative consequences for biodiversity and humans well-being, for example by displacing native species or transmitting diseases. However, while we have relatively good information on the historical spread of alien species, there is still little knowledge about their future development.

At the moment, it is not yet possible to generate precise predictions based on computer models as to how the spread and impact of alien species will change in the future. Therefore, expert assessments via standardized surveys are an important tool to obtain a better understanding of the causes and consequences of the spread and impact of alien species for the coming decades. The expert survey carried out in the study revealed, that an increase of 20 to 30 percent in the number of newly introduced alien species is considered sufficient to cause massive global biodiversity loss - a value that is likely to be reached soon, as the number of introduced species is constantly increasing.

Furthermore, humans are the main driver of the future spread of alien species. The experts identify three main reasons, primarily the increasing global transport of goods, followed by climate change and the extent of economic growth. The study also shows that the spread of alien species can be greatly slowed down by ambitious countermeasures.

The researchers additionally investigated the influence of the increase of alien species on different regions of the world: For example, tourism is a major driver of biological invasions in tropical and subtropical regions, while climate change favors the survival and establishment of alien species in the future, especially in polar and temperate regions.

Politics have the responsibility to act

“Our study illustrates the option space we currently have to reduce the future impacts of alien species”, says first author Dr Bernd Lenzner from the University of Vienna. The scientists believe that political decision-makers have the responsibility to act. The results form an important scientific basis for the further development of international agreements such as the Sustainable Development Goals or the Convention on Biological Diversity.

“Minimizing the effect of other important global change drivers such as eutrophication and pollution also indirectly will potentially reduce species invasions and its effects”, says Dr Marten Winter, a co-author from iDiv. “Moreover, we see an urgent need to increase joint collaborations towards an exchange of spatially highly resolved monitoring data as well as across political borders coordinated alien species management.“