The space of the root economy comprises two independent gradients. The expression of a plant's roots depends on how the respective species has strategically aligned itself in the course of evolution with regard to these two gradients. A 'fast' or 'slow' economic strategy within the construction gradient is found in roots as well as in above-ground leaves and shoots. The collaboration gradient, on the other hand, only exists underground: do-it-yourself roots are comparatively thin and long to absorb as many nutrients as possible from the soil, while outsourcing roots are thicker to accommodate the symbiotic fungi. (Picture: Authors of the study) 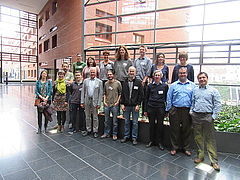 Based on a press release by Freie Universität Berlin

The formation of a plant’s root growth often depends on symbiosis with fungi. This is the main finding of an international group of researchers with members from Freie Universität Berlin (FU), the German Center for Integrative Biodiversity Research (iDiv), and Wageningen University, among others, has been studying the complex belowground economy of roots. In the journal Science Advances the biologists describe the different growth strategies found in root systems and how they “collaborate” with fungi. Their findings are based on the analysis of approximately 1,800 plant species from around the world and the specific traits of their roots. The new insights will help scientists better understand “root economics” and the adaptations and exchanges that take place belowground as well as how environmental changes affect these relationships.

Through photosynthesis, plants have the ability to convert light into chemical energy and to bind carbon, the basic biochemical building block. They absorb vital substances from the soil through their roots – nutrients, minerals, and water. The authors of the study compare these metabolic processes with economic value chains. In plant economies, carbon is the main currency. Plants can invest carbon to promote organ growth, for example, to produce leaves, flowers, seeds, or roots.

It has long been known that plants follow different growth strategies when forming their aboveground organs, especially leaves. Short-lived leaves, for example, can be produced in a relatively cost-efficient way, but can only photosynthesize and bind carbon for a limited time. Long-lived leaves, on the other hand, demand higher investments, but continue to function for a longer period. The research team led by Dr Joana Bergmann (FU) with participation of Prof Dr Alexandra Weigelt (Leipzig University, iDiv) was able to prove that root growth, too, follows similar economic principles. How roots develop and how long they live depend on a plant’s biochemical investments in carbon and energy.

However, according to the study, symbiosis with mycorrhizal fungi has an especially strong influence on root traits. Many plants “outsource” their nutrients supply chain below ground to varying degrees. Fungi provide them with soil nutrients through special exchange methods. The fungi are then paid in carbon through the plant roots. The scientists discovered that the adaptations that make the symbiotic exchange with fungi have a significant effect on root traits. In addition, closely related plants tend to show similar patterns in how their roots grow.

This give-and-take relationship has adapted along evolutionary lines over time, explains Joana Bergmann, lead author of the research project. The “division of labor” between plants and fungi, she says, depends on the depends on the plants’ evolutionary history. Plants have many different growth strategies and collaborative methods – such as fungal outsourcing – that they can use to acquire the nutrients they need.

The paper is a joint effort of the working group sROOT. sDiv, the synthesis center of the German Center for Integrative Biodiversity Research (iDiv), finances working group meetings with 10 to 20 international scientists to work on current scientific issues, funded by the German Research Foundation (FZT 118).