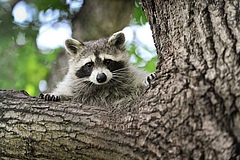 A contribution to "World scientists’ warning to humanity: a second notice"

In a new study, scientists from around the world with participation of researchers from the Centre for Environmental Research (UFZ) and German Centre for Integrative Biodiversity Research (iDiv) warn that the threats posed by invasive alien species are increasing. They say that urgent action is required in order to prevent, detect, and control invaders at both local and global levels.

Alien species are plants, animals and microbes that are introduced by people, accidentally or intentionally, into areas where they do not naturally occur. Many of them thrive, spreading widely with harmful effects on the environment, economy, or human health.

The study, published in Biological Reviews, was carried out by an international team of researchers from 13 countries across Africa, Asia, Australasia, Europe, North and South America. It states that the number of invasive alien species is increasing rapidly, with over 18,000 currently listed around the world.

The researchers attribute the escalation in biological invasions to the increase in the number and variety of pathways along which species spread, and to the increasing volume of traffic associated with those pathways. They highlight the role of emerging pathways such as the online trade in unusual pets, and the transport of species across oceans on rafts of plastic.

The study also shows how other drivers of global change, such as climate change, land-use change, alongside international trade are exacerbating the impacts of biological invasions. For example, species transported through shipping can now thrive in new regions, owing to climate warming; and the permanent opening of the Arctic Ocean with global warming is allowing marine species to move between the Atlantic and Pacific Oceans.

The paper is a part of the World scientists’ warning to humanity: a second notice initiative calling for urgent change in our stewardship of the Earth and the life on it.  The authors stress that biological invasions can be managed and mitigated. They point to approaches that are working around the world and make specific recommendations for improved management. For example, the introduction of more stringent border controls, including X-ray machines and detector dogs, has led to a progressive decline in the rate of fungal plant pathogens entering New Zealand.

Professor Petr Pyšek of the Czech Academy of Sciences and Charles University in Prague, lead author of the paper, says: “As our knowledge about invasive alien species increases, the problems associated with biological invasions are becoming clearer. The threats posed by invasive alien species to our environment, our economies and our health are very serious, and getting worse. Policy makers and the public need to prioritize actions to stem invasions and their impacts.”

Professor Ingolf Kühn, an ecologist at UFZ and iDiv says: “We summarised the pertinent knowledge on alien invasive plant and animal species in a brief review. And even if many alien species do yet have impact on the environment, some species are so harmful that immediate action is necessary to conserve our biological diversity” .