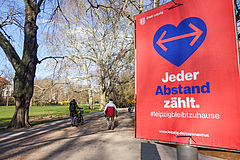 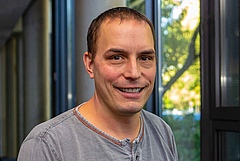 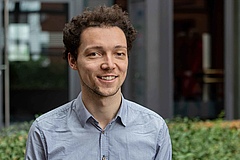 Leipzig, Hamburg, Kiel. How high would the infection and death rates be if Germany had relied solely on voluntary social distancing at the beginning of the pandemic? A new study by the German Centre for Integrative Biodiversity Research (iDiv) and the universities of Leipzig, Hamburg and Kiel shows that even purely voluntary social distancing – in order to protect ourselves and others – could stabilise the number of new infections (R0=1). However, this would mean 100 times more infections and 15 times as many deaths compared to an optimal policy of reducing social contacts. The study was recently published on a preprint server.

“This is serious – so take it seriously.” This is what Chancellor Angela Merkel said on 18 March in an unprecedented televised address, her only such address other than her annual New Year’s message. She made it clear that the COVID-19 pandemic meant exceptional contact restrictions for the population. Among other things, the measures saw schools and day-care centres shut and travel prohibited.

The number of deaths shows that Germany has handled its lockdown well. But would this have been possible with less radical restrictions? How sensible would people have been by themselves? And how would infection and death rates have developed without government intervention?

To investigate just this, for the first time environmental economists at iDiv, Leipzig University and the universities of Hamburg and Kiel combined a common epidemiological model with behavioural data from a large-scale, representative survey. At the beginning of the pandemic in mid-March, the researchers had more than 3500 people throughout Germany surveyed about whether they had reduced their contact with other people, and their motives for doing so. The results were then fed into a common epidemiological model. This enabled the researchers to extend previous epidemiological approaches to include the social component of human decisions.

On this basis, the researchers then developed models predicting infection and death rates under different conditions: a) What kind of policy would strike an optimal balance between protecting health and maintaining a minimum level of social life? What would be the infection and death rates in this case? And how would these figures evolve in the absence of state intervention, if people restricted their contact with others purely voluntarily b) only in order to protect themselves or c) also to protect others?

The main focus is on the question of the “social cost” of an infection. The costs of a person becoming infected with the SARS-CoV-2 virus are not only the health consequences for that person, but also the increased risk of infection for everyone else.

The scientists found that an optimal regulatory approach – one that took into account health consequences for everyone equally – would impose a drastic lockdown at the beginning of the pandemic in order to reduce physical contact, thereby virtually eradicating the virus. Subsequently, stabilising people’s contact with others at about one third of the normal, pre-pandemic level would be sufficient until a vaccination became tangible. This scenario, however, includes far more drastic measures than those actually imposed by Germany’s federal and state governments.

Voluntary social distancing for self-protection stops the pandemic, but does not go far enough

The survey showed that even without state intervention, people severely restricted their physical social contacts anyway in order to protect themselves. People would have intensified this protective behaviour as the virus spread throughout the population and people considered themselves to be at greater risk of becoming infected. As such, purely selfish behaviour in the population would have also led to a stabilisation of the infection rate (basic reproduction rate of R0=1). However, this freedom of choice would have come at a price. Compared to the optimal policy, the number of infections would have increased a hundredfold and there would be about 15 times as many deaths over the course of the pandemic. The simulations also showed that the additional motivation of wanting to protect others as well (i.e. altruistic behaviour) would result in around a third fewer infections and deaths compared to the purely selfish approach.

“According to our simulations, people’s fear of becoming infected is enough to cause them to limit their social contacts so much that herd immunity is unlikely in the coming years,” said Dr Jasper Meya, co-author of the study and postdoctoral researcher at iDiv and Leipzig University.

How the pandemic develops depends primarily on how people behave. “Our analyses show that, especially in the case of high numbers of infected people and thus a high risk of infection, self-protection and altruistic behaviour can already deliver a considerable portion of the social distancing needed to protect the public,” said Meya. However, the study also shows that, especially at the beginning of the pandemic, a bolder approach to social distancing saves many more lives: “If Germany had relied solely on personal responsibility in the initial weeks after mid-March, the death toll would most likely have been many times higher.”

“As environmental economists, our motivation to examine such health issues is the fact that health protection is a public good, the availability of which depends on human behaviour,” said Professor Martin Quaas, head of the Biodiversity Economics Group at iDiv and Leipzig University. As part of the sustainability debate, the group normally researches various uses of natural resources, such as fish stocks or forests, and how to protect them. “The results from our COVID-19 study also deliver important insights for the provision of other common goods – such as a stable climate or intact biodiversity, said Quaas.