Turning the spotlight on insects 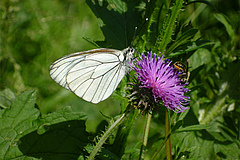 The black-veined white (Aporia crataegi) is a widespread butterfly found in very variable habitats. It is one of the few butterfly species to benefit from Natura 2000 conservation areas. (Picture: Martin Musche)

Paris, Halle, Leipzig. The European Union's (EU) network of Natura 2000 conservation areas is designed to protect endangered animal and plant species and their habitats. But it also benefits a large number of non-target species. However, these beneficiaries are unevenly distributed across the major animal groups, reports an international team of researchers, including biologists from the Helmholtz Centre for Environmental Research (UFZ) and the German Centre for Integrative Biodiversity Research (iDiv), in the journal Conservation Biology. According to the research team, almost half of the bird species not named in the target group benefit from Natura 2000 protection, but only one forth of the butterflies.

“When it comes to the prioritisation of future conservation efforts, we need to pay more attention to insects”, concludes co-author Prof Josef Settele from UFZ and iDiv. The agricultural ecologist and butterfly specialist does not only have butterflies in mind, but also other, often less visible groups such as mosquitoes, ants and the many soil insects that also play an essential role in nature.

However, the researchers only investigated the impacts of Natura 2000 conservation areas on birds and butterflies. Why were these groups chosen? “For these two groups only we have long-term observations going back many years or even decades,” says Settele. So the researchers evaluated data collected by thousands of volunteers over an extended period at over 9,500 sites for birds and over 2,000 sites for butterflies.

Ornithologists and butterfly enthusiasts, both volunteers and professionals, regularly visit these areas, counting the number of individuals of the respective species at a given time. Between the beginning of April and the end of September, 318 volunteers in Germany walk 460 defined routes, usually once a week, and count the butterflies they see. Only in unfavourable weather conditions, for example when strong winds prevent most butterflies from flying, the observers take a break as well. Between 2005 and 2018, volunteers counted 3.3 million butterflies in Germany alone.

The ornithologists also collected a huge amount of data, which has now been evaluated by Vincent Pellissier, from the Sorbonne University in Paris and lead author of the study, and his international colleagues. In studies of this kind, most researchers have so far focused on species diversity, and they have often counted more species within Natura 2000 areas than outside. But little is known about the frequency of these supposedly more common species to date, which often play an essential role in nature.

Natura 2000 very successfully targets selected habitats and species of high conservation interest in the European Union. In woodlands, for example, the focus is often on bat species facing difficulties in large areas of the EU. In open landscapes, on the other hand, the targets often are dry and nutrient-poor grasslands, which serve as habitat for rare butterflies such as the Large Blue. It is with these habitats and species in mind that, since 2013, 27,700 of these Natura 2000 areas have reached a total coverage of approximately 18% of the land and around 7% of marine areas in the European Union. This has made the network into one of the world's most successful conservation initiatives.

However, it isn't only these selected species that play an important role in nature, but also many others, that are believed to benefit equally from the establishment of Natura 2000 sites. If their populations dwindle, food webs can be disrupted and ecological patterns can be significantly altered, sometimes with enormous impacts on nature. It is therefore important to take these non-focal species into consideration – and the picture regarding birds and butterflies is very different.

For almost half of the 155 bird species investigated, there are significantly more individuals living in regions with a high cover of Natura 2000 areas, many of them being typical woodland dwellers. By contrast, only 27 out of 104 investigated species of butterflies benefit from this protection, with only two of these species living in woodlands. At first glance this may not seem surprising, since European butterflies spend much more time fluttering across sunny meadows than through woods. But on top of that, many forests in Germany are planted. "The trees growing there are all of the same age and their crowns form a dense roof that allows little sunlight to penetrate," explains Martin Musche, also an insect researcher at the UFZ and a co-author of the study. But most butterflies cannot make their home on the dim forest floor. "So from a butterfly's perspective, we would need a lot more woodland with plenty of light," says the biologist.

Outside woodland areas, the situation does not look too favourable either. Specialists of open landscapes such as the Small Blue are not recorded more frequently in Natura 2000 areas. “We haven't yet investigated the reasons for this, but we do have a strong suspicion,” says Martin Musche. It appears that grasslands and other open habitats in Natura 2000 areas are not faring too well. In many places, dry and nutrient poor meadows are often overgrown with bushes, depriving specialist butterflies of the environment they depend on.

Other meadows are fertilised, and mown more frequently than just once or twice a year. This has a very negative impact on the conditions for many butterflies. “It could easily be the same for other insects that we haven't studied yet,” says Musche. When new conservation areas are designated, or a management plan is being developed for existing areas, then much more attention needs to be given to previously neglected insects.

Published in parallel to the Biodiversity Strategy of the European Union, the paper helps placing a focus on the potentials and the challenges for EU's nature protection, especially for grasslands. “The european conservation policy is not sufficient for maintaining Europe's grasslands,” says Dr Guy Pe’er, postdoctoral researcher at iDiv and co-author on the paper. “Particularly the CAP as the key mechanism affecting permanent grasslands, focuses on area rather than quality, thus allowing onward habitat degradation even under seeming protection. To stop insect declines, the CAP needs to adapt clear definitions for high-quality grasslands, promote High-Nature-Value farming areas and set sufficient incentives to protect them.”

The study emerges from the synthesis project LOLA-BMS (How Local-scale processes build up the Large-scale response of Butterflies to global changes: Integrative analysis across Monitoring Schemes), led by Romain Julliard (MNHN, Paris) and Guy Pe’er (UFZ/iDiv), funded by the French Foundation for Research on Biodiversity.