A glimpse into the future of tropical forests 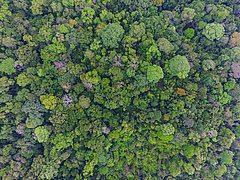 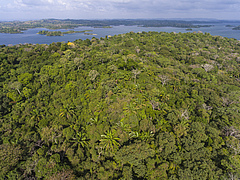 Patches of secondary forest that re-grow after agricultural use has been abandoned 70 to 100 years ago. (Picture: Christian Ziegler) 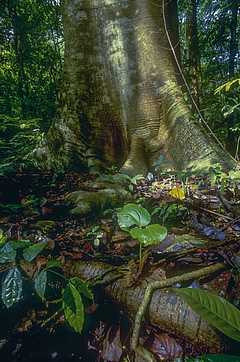 Trunk and seedling of a long-lived pioneer (Cavanillesia platanifolia). Giant long-lived pioneers store most of the biomass in this tropical forest, even though their seedlings only very rarely survive and make it to the canopy. (Picture: Christian Ziegler) 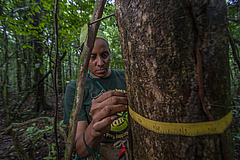 Since 1982, more than 200,000 trees are measured every five years at Barro Colorado Island.  (Picture: Christian Ziegler)

New method enables predictions for the development of species-rich forests

Leipzig / Panama City. Tropical forests are a hotspot of biodiversity. Against the backdrop of climate change, their protection plays a special role and it is important to predict how such diverse forests may change over decades and even centuries. This is exactly what researchers at the German Centre for Integrative Biodiversity Research (iDiv), Leipzig University (UL) and other international research institutions have achieved. Their results have been published in the scientific journal Science.

Nowhere in the world is the loss of the so-called primary forests advancing faster than in the tropics. The natural primary forests are compelled to give way to agriculture and livestock farming and, as a result of clearing, important habitats are lost. In addition, the carbon stored in the trees is released as CO2. When the cleared areas are no longer used, new ‘secondary’ forests grow on them and these then capture part of the previously released CO2. The promotion of such natural forest areas can therefore offer an inexpensive way of mitigating climate-damaging CO2 from the atmosphere and, at the same time, promote biodiversity.

However, not all forests develop in the same way. In order to manage the recovery and renaturation of tropical forests, it is necessary to be able to predict how the forests will develop. To achieve this, certain parameters must be known; how quickly do the trees grow and how quickly do they die? How many offspring do they produce, which then in turn ensure the continued existence of the species? This is precisely the data which has been recorded in Panama over the past 40 years, in one of the most researched tropical rainforests in the world, for 282 tree species.

Using this data, researchers were able to show that trees pursue different strategies during their development. On the one hand, they differ in terms of their pace of life; while ‘fast’ species both grow and die quickly, ‘slow’ species grow slowly and reach an old age. On the other hand, trees can differ regarding their stature, irrespective of pace of life. These ‘infertile giants’, also known as long-lived pioneers, grow relatively quickly, and reach a great stature, but produce only a few offspring per year, contrasting with the ‘fertile dwarfs’; small shrubs and treelets which grow slowly and do not live long, but produce a large number of offspring.

But how many, and which factors of this demographic diversity have to be taken into account in order for us to be able to predict the development of a diverse forest? An international research team used a digital experiment to answer this question. In a computer model, they simulated how trees grow, die, produce offspring and compete for light as in a real forest. They allowed different configurations of the model to compete against each other; these contained either all 282 species from Panama or only a few selected ‘strategy types’. The species differed in only one or two respects; their pace of life and their stature. The respective model predictions were then compared with the observed development of real, regrowing secondary forests.

The researchers found that their model worked reliably with only five strategy types, but that both strategy dimensions must be taken into account. “In particular, the long-lived pioneers are important because they account for the bulk of biomass – and carbon – in this forest type at almost all ages, and not only in middle-aged forests as assumed so far,” said first author Dr Nadja Rüger, junior research group leader at iDiv and UL.

Following years of research, Rüger and her colleagues have now been able to establish a completely data-driven modelling approach which can be used to predict the development of species-rich forests, without the usual, tedious adjustment and calibration of unknown model parameters, thus saving both time and resources. “Basically, we were able to reduce the forest to its essence, and that was only possible because we know so much about the tree species in the forest in Panama,” said Rüger.

While forests are being impacted by climate change, they are also significantly slowing its pace – estimates are the vegetation of the earth is soaking up approximately 34% of the carbon molecules we emit, annually. However, scientists are not sure whether we will be able to count on this significant ecosystem service in the future. “By advancing our ability to predict forest carbon storage and represent the rich biodiversity within tropical forests, we are now on a path to much more accurately capture important ecological processes in the global models that are used by policy makers to predict the pace of climate change,” said co-author Caroline Farrior, an assistant professor at the University of Texas at Austin.