Climate change will lead to abrupt shifts in dryland ecosystems 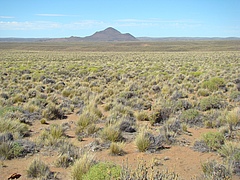 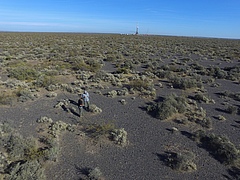 Researchers in one of the areas investigated in the study, in Argentinian Patagonia (Picture: Juan José Gaitán, INTA (Argentina)) 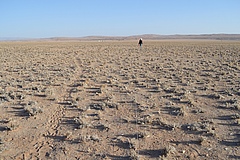 Based on a media release of the University of Alicante

Alicante. Increases in aridity can alter the capacity of dryland ecosystems to sustain life, also limiting the provision of essential ecosystem services to more than 2 billion people living in those areas, such as soil fertility and biomass production. This was shown by a study recently published in Science. The study was led by Fernando T. Maestre from the University of Alicante, who is also a sabbatical at sDiv, the synthesis centre of the German Centre for Integrative Biodiversity Research (iDiv).

Drylands cover about 41% of the Earth’s land surface and host one in three humans inhabiting our planet. In these areas, life is highly influenced by aridity, i.e. the balance between the amount of rainwater and the water lost by evaporation. In this sense, aridity is increasing worldwide as a result of climate change. A study conducted by the Dryland Ecology and Global Change Lab at the University of Alicante (UA) led by Fernando T. Maestre revealed for the first time that as aridity increases, dryland ecosystems on the planet undergo a series of abrupt changes.

“In the study we found that numerous ecosystem characteristics had a non-linear response to small aridity increases. This means that there are levels at which faster, sometimes even abrupt shifts occur as a result of relatively small aridity increases. When certain aridity thresholds are crossed, the ecosystem undergoes disproportionate changes and becomes even more arid.

Three phases of change were identified by the researchers. First, when aridity levels cross values of around 0.54, “the ecosystem becomes limited by the lack of water. The vegetation changes and it becomes dominated by species adapted to drought, such as grasses and shrubs, as is already the case in many areas in the Iberian Peninsula”, researcher Fernando T. Maestre points out.

After these initial vegetation changes, when aridity values exceed 0.7, the soil becomes much less fertile. It loses its structure and becomes more vulnerable to erosion. Moreover, soil organisms that play essential roles in maintaining soil nutrients are radically affected, with a dominant presence of pathogens at the expense of more beneficial organisms.

Finally, beyond aridity values of 0.8, an abrupt loss of diversity and plant cover takes place. “Once this threshold is crossed, the water deficit is such that plants cannot thrive in these conditions. Biological activity is drastically reduced and life becomes conditioned by the windows of opportunity that occur during infrequent rain events. The ecosystem has become a desert”, Maestre says.

According to climate forecasts, more than 20% of the emerged lands of the planet may cross one or several of the aridity thresholds identified in this study by 2100. ‘Life will not disappear, but our findings suggest that these ecosystems may experience abrupt changes that will reduce their capacity to provide ecosystem services to more than 2 billion people, such as soil fertility and biomass production”, says Miguel Berdugo, lead author of the study and a researcher at the UA Dryland Ecology and Global Change Lab until January 2020.

The findings of this study are of great relevance in understanding the impacts of climate change on dryland ecosystems, as they could help establish mitigation actions. “While we will not stop climate change, I believe we still can minimise its negative consequences on these ecosystems, which are essential to achieve a sustainable development”, says Maestre. “By providing information on how vegetation and soil properties change as aridity increases, and by mapping those areas most sensible to such increases, our results can be used to optimise monitoring and restoration efforts, preserve biodiversity and avoid the desertification of these ecosystems.”