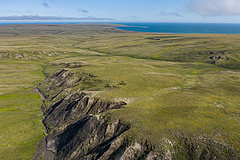 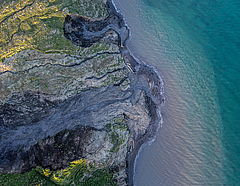 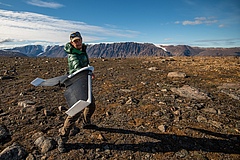 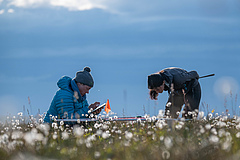 Based on a media release of the University of Edinburgh

New research techniques including drone and satellite technology are being adopted by scientists tackling the most visible impact of climate change – the so-called greening of Arctic regions. A team of 40 scientists from 36 institutions, supported by the German Centre for Integrative Biodiversity Research (iDiv), revealed that the causes of this greening process are more complex – and variable – than was previously thought. Their findings have now been published in Nature Climate Change.

As Arctic summer temperatures warm, plants are responding. Snow is melting earlier and plants are coming into leaf sooner in spring. Tundra vegetation is spreading into new areas and where plants were already growing, they are now growing taller. The latest drone and satellite technology is helping an international team of researchers to better understand how the vast, treeless regions are becoming greener.

Understanding how data captured from the air compare with observations made on the ground will help to build the clearest picture yet of how the northern regions of Europe, Asia and North America are changing as the temperature rises.

Now a synthesis project of 40 scientists from 36 institutions (www.idiv.de/stundra), hosted by iDiv’s synthesis centre sDiv, revealed that the causes of this greening process are more complex – and variable – than was previously thought.

Researchers from Europe and North America are finding that the Arctic greening observed from space is caused by more than just the responses of tundra plants to warming on the ground. Satellites are also capturing other changes including differences in the timing of snowmelt and the wetness of landscapes.

Lead author Dr Isla Myers-Smith from the University of Edinburgh said: “New technologies including sensors on drones, planes and satellites, are enabling scientists to track emerging patterns of greening found within satellite pixels that cover the size of football fields.”

This research is vital for our understanding of global climate change. Tundra plants act as a barrier between the warming atmosphere and huge stocks of carbon stored in frozen ground. Changes in vegetation alter the balance between the amount of carbon captured and its release into the atmosphere. Small variations could significantly impact efforts to keep warming below 1.5 degrees centigrade – a key target of the Paris Agreement. The study will help scientists to figure out which factors will speed up or slow down warming.

Dr Jeffrey Kerby, who was a Neukom Fellow at Dartmouth College while conducting the research, said: “Besides collecting new imagery, advances in how we process and analyse these data - even imagery that is decades old - are revolutionising how we understand the past, present, and future of the Arctic.”

The research was also supported by the Synthesis Centre of the German Centre for Integrative Biodiversity Research (iDiv), and was informed by a U.S. National Academy of Sciences workshop, Understanding Northern Latitude Vegetation Greening and Browning.