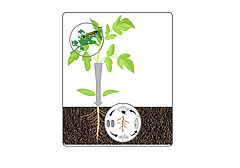 Congratulations to Crispus Mbaluto! The first chapter of his PhD thesis is now online at AoB PLANTS. His research, funded by DAAD,  shows that the effect of aboveground caterpillar feeding on root knot nematodes is depending on the life history stage of the nematodes. In this paper, Crispus analyses the different hormone signaling pathways involved in this intriguing root-shoot interaction. This project also involved former visiting students Melody Fu and Esraa Ahmad, as well as MIE alumna Ainhoa Martínez-Medina and MIE group leader Nicole van Dam. William Salter also wrote about a nice blog on BotanyOne on our paper.