The composition of species is changing in ecosystems across the globe 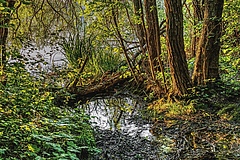 Leipzig/Halle/St Andrews. Biodiversity is changing rapidly in many places all over the world. However, while the identities of species in local assemblages are undergoing significant changes, the number of species is on average remaining relatively constant. Thus, changes in local assemblages do not always reflect the species losses occurring at the global scale. These findings are based on observations by a team of scientists led by the German Centre for Integrative Biodiversity Research (iDiv), the Martin Luther University Halle-Wittenberg (MLU) and the University of St Andrews. Their findings, which have been published in Science, revealgreater changes inspecies composition in marine systems than on land, with most extreme changes in tropical marine biomes.

Human activities are fundamentally altering biodiversity. Species are declining at the global scale, but this is contrasted by highly variable trends at local scales. An international team of scientists from leading universities across Europe, the USA and Canada aimed to identify geographic variation in biodiversity change. The scientists examined longitudinal variation in species richness (number of species) and species composition (identities of species). They pieced together and mapped over 50,000 biodiversity time series from studies across the planet using the biodiversity database BioTIME, hosted at the University of St Andrews. They were then able to dissect variation in biodiversity trends to identify the places that are changing most rapidly.

Previous findings showing no net change in the number of species at local scales had proved extremely controversial. Thus, the group of researchers aimed to reach a consensus on global biodiversity change. Their meetings were hosted by sDiv, the synthesis centre at iDiv. “sDiv managed to bring people together who had very different backgrounds and find common ground”, says Prof Jonathan Chase, head of the Biodiversity Synthesis group at iDiv and MLU.

The results show how biodiversity change varies geographically. The species that make up local assemblages are changing everywhere, but rates of species richness change and turnover were higher and more variable in marine biomes, with maximum turnover rates twice those observed in terrestrial biomes. This could be due to greater sensitivities of marine species to climate warming.

Moreover, tropical marine regions are exhibiting biodiversity change at the extremes of richness gains, losses and turnover more often than other regions. “If these trends are maintained, this could lead to a dramatic restructuring of biodiversity, with potentially severe consequences for ecosystem functioning”, says first author Dr Shane Blowes from iDiv and MLU. The tropics, which harbour the majority of biological diversity, are generally considered to be where biodiversity is most threatened on the planet. In the context of climate change, there are likely fewer species available to replace those species lost in tropical zones.

“When biodiversity is in the news these days, it is often because the Amazon is on fire, or there is a global mass mortality event in coral reefs, and rightly so, because these are terrifying news”, says senior author Dr Maria Dornelas from the University of St Andrews. “However, there is a lot of recovery also taking place silently in the background, and many places where not much is happening.” The new study shows that while some locations have experienced decreases in species richness, others show increases, whereas changes in species composition are far more ubiquitous. Knowing where biodiversity change is happening – and how – is critical to planning conservation and management strategies.

Detecting geographic variation in biodiversity trends not only improves our understanding of how and where biodiversity is changing worldwide, but it can also inform conservation priorities by identifying which regions to protect and which regions to help recover. However, despite the large amount of data synthesised for this study, biodiversity monitoring overall is lacking for many regions of the planet, e.g., the deep ocean and the tropics. The study highlights the critical importance of continuing to improve the spatial coverage of biodiversity monitoring. This will lead to better understanding of global biodiversity change and appropriate conservation strategies in the future.
Kati Kietzmann