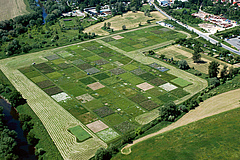 At the Jena Experiment, researchers study the role of biodiversity for ecosystem functioning. (Picture: Christoph Scherber) 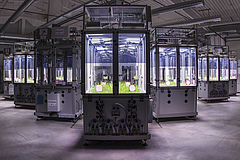 Joint media release of iDiv, the University of Leipzig and the Friedrich Schiller University Jena

Jena/Leipzig. The Deutsche Forschungsgemeinschaft (DFG) funds a new research unit at the Jena Experiment with a total of 5 million euros for five years. The research will be lead by the German Centre for Integrative Biodiversity Research (iDiv), the University of Leipzig and the Friedrich Schiller University in Jena and will investigate the mechanisms underlying the relation between biodiversity and ecosystem functions. For this purpose, the new research unit will also make use of other research platforms.

The diversity of species determines ecosystem functioning and, thus, the ecosystem services that are vital for humankind. However, we know only very little about the underlying mechanisms. This is now set to change: A new research unit will investigate, which mechanisms shape the relation between biodiversity and ecosystem services in the short and long term. The new unit will be led by Prof Nico Eisenhauer, head of the research group Experimental Interaction Ecology at iDiv and the University of Leipzig.

Until 2002, the later Jena Experiment was just an ordinary agricultural area: about 10 hectares in size, nestled in the floodplain of the river Saale and managed in a traditional way. To date, more than 500 experimental plots are breeding ground for different combinations of meadow plants: There are plots with only one plant species, others with two, four, eight, sixteen or even sixty different species. This unique fieldside laboratory allows the collection of long-term data and helps to find answers to fundamental questions about the role of species diversity and ecosystem functions. In the past, scientists already aimed to understand the complexity of ecosystems with the help of the Jena Experiment – from species to nutrient cycles; from plants to microorganisms and to animals. This innovative approach made the Jena Experiment internationally renowned.

The new DFG Research Unit wants to build on this reputation – and break new ground. Researchers from the fields of ecology, biochemistry and microbiology will be working together. “We will bundle expertise in Central Germany and beyond,” says Nico Eisenhauer. “This will be a unique collaborative approach. At the same time, we are building bridges between two experimental platforms: the Jena Experiment and the iDiv Ecotron.” The scientists will combine field experiments with tests in the controlled environment of the so-called iDiv Ecotron. This allows a detailed investigation of the mechanisms that shape the relation between biodiversity and ecosystems. “We know that species-rich communities are more resilient when it comes to extreme climate events. They also produce higher yields and have better protection against pathogens. If we can understand why this is the case, then we will be one step closer to a practical application of this knowledge,” says Eisenhauer.

The new research unit will try to answer these and other questions in 12 subprojects involving 12 German research institutions, including the Helmholtz Centre for Environmental Research (UFZ), the Max Planck Institute for Biogeochemistry in Jena and the Martin Luther University Halle-Wittenberg (MLU). International collaborations include universities from the Netherlands, Hungary, Switzerland and the US.