The biggest losers: Large predators most threatened by habitat isolation 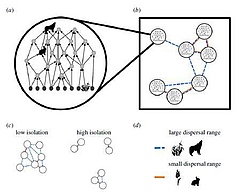 With only limited information about species that feed on each other and disperse between habitats, we can predict how complex food webs might respond to landscape changes. (Picture: Johanna Häussler) 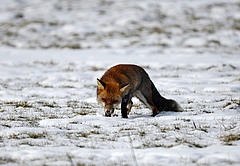 Isolated landscapes are a big problem for large predators such as tigers or foxes as they are the ones that run out of food first. (Picture: Pixabay)

Conservation planning must work towards sufficient exchange of species between local habitats, for example with the help of dispersal corridors. (Picture: Pixabay)

With increasingly isolated habitats, complex food webs are deconstructed from top to bottom.

Report by Johanna Häussler, doctoral researcher at iDiv and Friedrich Schiller University Jena, about a new publication in Proceedings B:

Leipzig. Human land-use change threatens natural ecosystems in which animals and plants live and feed. Natural landscapes get more and more separated, for example by roads and agricultural fields. But how do such landscape changes affect ecosystems – and the species in them?

It is impossible to observe all species in a whole landscape at once, let alone the innumerable interactions between them. One way to overcome this obstacle is the use of computer models that simulate the interactions between species. We developed a computer model to investigate the complex feeding and dispersal dynamics of food webs in large landscapes. With only limited information about species that feed on each other and disperse between habitats, we can predict how complex food webs might respond to landscape changes such as increasing habitat isolation and how these changes affect the diversity patterns of species embedded in complex networks.

We find that isolated landscapes are a big problem for large predators such as tigers or foxes. They are the ones that run out of food first. In our model, their prey gets less and less when distances between habitats expand. We assume that smaller animals have limited dispersal abilities and, thus, might struggle to successfully bridge between distant habitats. If there is not sufficient prey, large predators literally run out of energy and go extinct. But the loss of large predators can change the entire species community: As species interact in highly complex networks, other species might subsequently also face extinction, even if they are not be directly affected by habitat fragmentation, isolation or related issues such as landscape degeneration.

But there is hope: We can do something about it. To what extent we lose species strongly depends on the spatial context – in other words, how successful species can disperse between habitats. If we want to maintain species-rich natural communities with species at all trophic levels – from plants at the bottom of the food web to large predators at the top ­–, conservationists must consider that species interact in complex ways with one another and that their feeding and spatial dynamics are closely linked. Conservation planning must work towards sufficient exchange of species between local habitats to alleviate the bottom-up energy limitation of large predators. One way to achieve this is to increase the dispersal success in isolated landscapes, for example with the help of dispersal corridors. Avoiding habitat loss also plays a key role as the loss of habitat limits the overall availability of prey and poses a severe threat to large predators.