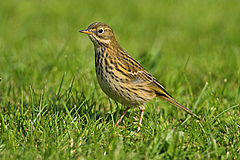 Birds that specialise on insect food have declined across Europe by 13%. This includes the meadow pipit (Anthus pratensis). (Picture: Mathias Schaef, living-nature.eu) 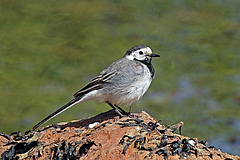 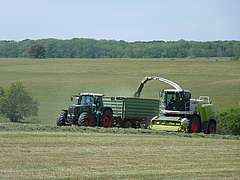 Insectivorous bird species whose populations have decreased most dramatically are those living on fields, meadows and pastures. (Picture: Klaus Valentin)

Based on a media release by Senckenberg

Frankfurt am Main/Leipzig. The number of birds that primarily feed on insects has decreased significantly during the past 25 years in the European Union. This is mainly due to the decline of these so-called insectivores in agricultural landscapes, researchers from the German Senckenberg Biodiversity and Climate Research Centre and the German Centre for Integrative Biodiversity Research (iDiv) report currently in the scientific journal Conservation Biology. It is the first Europe-wide study that examines how population trends of birds are related to their diet. Insectivores make up roughly half of all European bird species.

About half of the bird species found in Europe feed primarily on insects, and they are currently facing difficult times. “The populations of birds that feed mainly on insects have decreased on average by 13% between 1990 and 2015 in the European Union,” explains Dr Diana Bowler who now works at the German Centre for Integrative Biodiversity Research (iDiv) and the Friedrich Schiller University Jena (FSU).

Bowler teamed up with researchers from the Senckenberg Biodiversity and Climate Research Center, and discovered that since 1990, the European populations of white wagtail (Motacilla alba), northern wheatear (Oenanthe oenanthe) and meadow pipit (Anthus pratensis), among other species, have all decreased. These species prefer to pick up insects directly from the ground. The number of birds that feed primarily on flying insects, such as barn swallows (Hirundo rustica) and house martins (Delichon urbicum), has decreased as well.

While there are some declining insectivore species in several habitat types, species in some habitats do fare worse than others. The scientists are especially concerned about the situation in fields, meadows and pastures, which are home to the insectivorous bird species whose populations have decreased most dramatically.

The insect eaters share this fate with the so-called seed eaters. Some species, such as the Eurasian skylark (Alauda arvensis), whose diet, while not primarily insect-based, still contains a considerable proportion of insects, have also declined in agricultural areas. “Insect and seed eaters may no longer be able to find enough food in these habitats. Thus, the dramatic decrease of insects that has only been documented on a local basis to date apparently may have had a wider impact on bird populations,” says iDiv member Prof Katrin Böhning-Gaese, director of the Senckenberg Biodiversity and Climate Research Centre and professor at Goethe University Frankfurt.

The scientists suggest that some agriculture practices may be at least partly responsible for the Europe-wide decline of insectivorous birds. In addition to the widespread use of insecticides, the trend toward large-scale monocultures has caused the increasing loss of hedgerows, edge habitats and fallow fields, and many meadows and pastures are being converted into arable fields.

This not only makes it harder for the insectivores to find food, but also to find suitable nesting sites as well. However, in addition to agriculture, there are other pressures on bird populations, including climate change, which may also contribute to some of the declines.

While insectivores are on the decline, birds that have an omnivorous diet, eating a variety of food types, have fared better. “Except for a few individual species, the populations of omnivores have remained more or less stable across Europe since 1990. Omnivores now make up a higher percentage of the avian communities than they did previously,” explains Bowler.

According to Böhning-Gaese, the study results call for action: “Not all insect-eating birds but mainly those that search for insects in meadows and pastures continue to decline. This poses a problem, since these birds are the natural enemies of pest insects that can cause considerable damage in agricultural fields. If we want to stop the decline of insect eaters, we have to make significant changes to our agricultural practices.”