Biodiversity loss: habitat amount is the key, not fragmentation 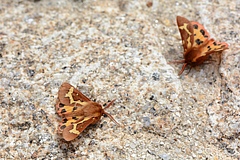 Arctia dejeani is a medium-sized macro-moth, which only occurs on the Iberian Peninsula. It is one of the species investigated in the study (picture: Henrique Pereira). 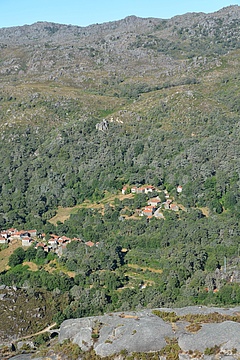 The most accurate predictor of species diversity at a given location is the total size of the remaining habitat around it. Fragmentation, the sizes of the habitat fragments of the sampling points and the distances from other fragments are irrelevant. These are the findings of a research project headed by the German Centre for Integrative Biodiversity Research (iDiv) and the Martin Luther University Halle-Wittenberg (MLU), recently published in the renowned Journal of Biogeography. This brings clarity to a scientific debate on how biodiversity can be conserved best in human-modified landscapes. The researchers suggest rethinking the prevailing approaches of island biogeography to manage biodiversity.

The theory of island biogeography from the 1960s is typically used as a basis for predicting species richness in a location. According to this theory, species richness depends on the size of the insular area and its distance from the ‘mainland’; its degree of isolation. Conservation biologists adopted the concept to assess the effect of increasing habitat fragmentation on population development caused by, for example, roads, clearcutting and agricultural use. However, researchers have increasingly questioned the accuracy of this approach. An alternative could be the habitat amount hypothesis, according to which only the total available area of the habitat in the surrounding landscape determines biodiversity; fragmentation, the sizes of the fragments and their distances from each other, plays no role. “Identifying which of these two theories is correct is essential to develop the best management strategies for conservation in countryside landscapes,” says study coordinator Prof Henrique M. Pereira. Pereira heads the Biodiversity and Conservation Research Group at the iDiv research centre and the University of Halle. To answer this question, the joint first authors Dr Thomas Merckx (UCLouvain) and Dr Murilo Dantas de Miranda from the iDiv research centre and the University of Halle (MLU), led by Prof Henrique M. Pereira (iDiv/MLU) compared the two approaches, the ‘habitat amount hypothesis’ and the ‘patch size and isolation effect’ with empirical data specifically collected for the purpose.

The researchers worked in three different habitat types, forest, scrubland and meadows, in the Portuguese Peneda-Gerês National Park. There they collected moths with light traps and sorted them according to their preferred habitat type. They then determined the number of species collected at a given spot and set this proportionally to the total surrounding amount of the respective habitat type, the area of the sampled fragment and distance from the nearest other fragment. The results show that the number of species of both forest and meadow moths is more dependent on the total area of the preferred habitat than on the configuration of habitat patches. Thus, the results support the habitat amount hypothesis.

This finding was also confirmed through the calculation of beta and gamma diversity, that is, the heterogeneity and spatial distribution of species diversity in the region: consideration of the total amount of the habitat by using the cSAR-model (countryside species area relationship) provided better results than by implementing the commonly used SAR-model.

"Our work adds to a growing body of evidence suggesting that the habitat amount hypothesis is correct," says Pereira. Ultimately, this insight may cause a major paradigm shift in biodiversity science: Ecology textbooks will have to be rewritten and landscape management policies changed. For decisions on conservation measures, we might thus need to put more focus on preserving the total area of habitats rather than on their interconnectedness,” says Pereira.
Sebastian Tilch