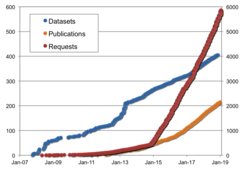 With the release of version 5, trait data are now publicly available under a creative commons attribution license (CC-BY), which means anybody can use the data under the only condition of appropriate citation. However, access to else unpublished data may be restricted temporarily on request, normally for up to two (+2) years, until data are published in the scientific literature.

TRY is a network of vegetation scientists founded in 2007 with the aim to provide a global database of plant traits to support Earth system science and ecology. TRY is headed by Future Earth, the Max Planck Institute for Biogeochemistry and iDiv, the German Centre for Integrative Biodiversity Research.