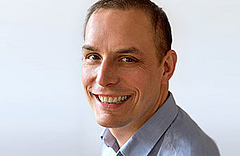 Martin Quaas will build a new research group on the interactions between biodiversity and economics at the iDiv research centre and Leipzig University. (Picture: Irina Höft)

Leipzig. The German Centre for Integrative Biodiversity Research (iDiv) Halle-Jena-Leipzig and the Faculty of Economics and Management Science at Leipzig University will receive a new joint professorship: Martin Quaas will join the faculty as Professor of Biodiversity Economics on 1 October. Quaas researches interactions between economics and biodiversity; for example, the effect of quotas on fishermen's incomes and stocks of marine fish species. Quaas completes a group of nine professors specifically appointed to develop the iDiv research centre, which is funded by the DFG and was founded in 2012.

Martin Quaas is the first non-biologist to head a working group at the iDiv research centre in the Bio City, Leipzig. With Prof Quaas, iDiv extends its strategic orientation into the social sciences. Director Prof Christian Wirth is pleased that iDiv and Leipzig University have managed to acquire one of the best minds at the interface of ecology and economics: "iDiv wants to understand how economics can work with biodiversity and not against it. For this we urgently need economic expertise. We searched worldwide for experts and have succeeded in bringing Martin Quaas, a star of the scene, to Leipzig. "Prof Uwe Vollmer, Dean of the Faculty of Economic and Management Sciences at Leipzig University, is also looking forward to the collaboration:" Martin Quaas and his group now face the exciting task of exploring a new field of research with their students. This sharpens the profile of both Faculty and University, further enhances our visibility and makes Leipzig even more attractive as a study and research location."

Martin Quaas researches the interactions between economics and biodiversity. At the University of Kiel, his previous employer, marine ecosystems were the primary focus. Quaas investigated which economic incentives for fishermen most effectively lead to the recovery of fish stocks. "We have not even managed to solve the problem of overfishing for the North and Baltic Seas," says Quaas. "We need to find new ways to preserve marine biodiversity."

Martin Quaas wants to make his contribution. He sees his new place of work in Leipzig offering ideal conditions for this: "At iDiv, I can combine my economic research with cutting-edge scientific research. I think such an integrative approach is absolutely essential in order to develop solutions to combat species loss. I would like to contribute to ensuring that Leipzig continues to play an international pioneering role with this integrative approach."

Although Quaas' new professorship starts in October, he and his family have been in Leipzig since August. His two daughters were able to start attending their new schools right at the beginning of the school year.

Another family member has been living in Leipzig for some time: Martin Quaas' twin brother Johannes is Professor of Theoretical Meteorology at Leipzig University. Martin Quaas has already lived in Leipzig too: from 2004 to 2007 he worked at the Helmholtz Centre for Environmental Research (UFZ) - one of iDiv's most important partners. Martin Quaas is happy to be back: "Leipzig is not only a great place to explore species diversity conservation. The city itself also offers a wide variety of cultural activities." Volker Hahn