Both evolutionary biologists and ecologists are concerned with the diversity of life (figure: Adrien Favre). 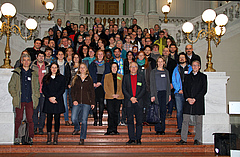 The Symposium brought together more than 120 researchers from 22 countries. Many of them are on this photo (photo: Juliana Menger). 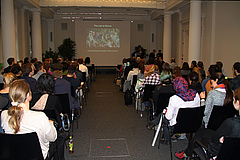 They presented their work in talks and on posters (photo: Juliana Menger).

Note for the media: Use of the pictures provided by iDiv is permitted for reports related to this media release only, and under the condition that credit is given to the picture originator.
The Phylogenetic Symposium 2016 highlighted synergies between the two research fields Leipzig. From November 18-20, the Phylogenetic Symposium 2016 took place at the Leipzig University with over 120 participants from 22 countries. The meeting was themed ‘Evolution meets Ecology’ and aimed at presenting recent achievements at the interface between these two research areas, which both study the diversity of life. It was organized by two iDiv members from Leipzig University, Prof. Alexandra Muellner-Riehl (Department of Molecular Evolution and Plant Systematics) and Prof. Martin Schlegel (Department of Molecular Evolution & Animal Systematics). Talks and posters, presented by local and international scientists, addressed questions like: What are the drivers of biological diversification? What ecological and evolutionary processes influence the assembly of biological communities? What are the mechanisms underlying the evolution of parasitism and mutualism between species? And how can we investigate speciation processes and diversification at higher taxonomic levels using evolutionary genomics? The next Phylogenetic Symposium will take place at the Museum für Naturkunde in Berlin, 24 – 26 November, 2017. For more information, visit the Symposium website:
https://conference.uni-leipzig.de/phylosym2016/
« back to Archive 2016
Share this site on: