With a little help from my fungus: tomato plants are more resistant against nematodes when colonized by a fungus 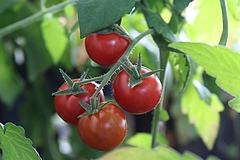 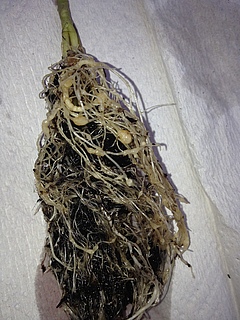 When tomato plants are infested with nematodes, the roots form galls that are then inhabited by the little worms (photo: Ainhoa Martínez-Medina). 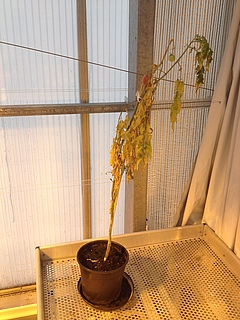 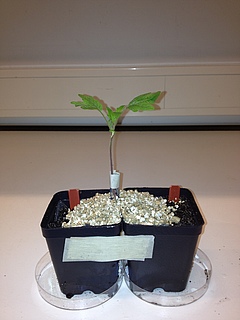 To study the interaction between tomato plants, the Trichoderma fungus and the nematodes, the researchers used a split-root study design (photo: Ainhoa Martínez-Medina). 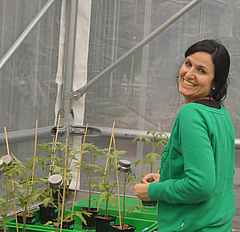 Leipzig/Jena. Plants are constantly challenged by hungry animals and infectious microbes. Tomato plants, for example, are often infested with little worms that feed on their roots. A fungus can help them to better defend themselves against these attacks, scientists report in the journal New Phytologist. In the future, farmers and gardeners might benefit from the new findings, as they may be able to use a kind of 'fungus-vaccinatio'n to prepare their tomato plants for impeding an infestation with worms.
For tomato plants, major enemies are nematodes of the species Meloidogyne incognita. These are little worms that first induce the roots to form galls, which they then inhabit, feeding on the plant tissue. The plants' problem is: they cannot run away from their attackers. However, they have other means of defending themselves, namely chemical substances that are toxic or deterrent to the parasitic nematodes. The production of these compounds in the plant is tidily regulated by small hormones, like salicylic and jasmonic acid. Not all interactions with other organisms are detrimental for plants, however – some can be beneficial. For example, associations between specific microbes and plant roots. Similar to microbial communities in the human gut, microbial communities associated with roots can provide their hosts with essential functions related to nutrient acquisition and protection against infections. One example for such an association has now been reported by an international team of researchers in the journal New Phytologist: a fungus of the genus Trichoderma lives inside the tissue of tomato plants (endophytically) and helps its host to defend itself against infestations by parasitic nematodes. “The fungus boosts plant immunity by enhancing the production of toxic chemical compounds upon nematode attack. This limits the invasion of the roots by nematodes, reduces the nematodes’ fecundity and compromises the formation of root galls”, explains Dr. Ainhoa Martinez-Medina, first author of the study and a scientist at the German Centre for Integrative Biodiversity Research (iDiv) and the Friedrich-Schiller-University Jena (FSU). Martinez-Medina has conducted the experiments at Utrecht University (Netherlands), with which she had been affiliated before moving to Leipzig. To investigate the complex interactions between the tomato plants, the fungus, and the nematodes, the researchers have used a sophisticated study design in the laboratory. Half of the roots of their test plants were grown in one pot, and the other half in another pot. This allowed the scientists to test different combinations of their experimental treatments, namely infestation with nematodes versus no infestation, and association with fungus versus no association. Subsequently, marker genes involved in pathways modulated by salicylic and jasmonic acid were investigated. The results show that the Trichoderma fungus “primes” the plant, which can then defend itself faster against nematodes. “Such a ‘priming’ is comparable to a vaccination for us humans, through which our immune system learns and subsequently can react more effectively to an infection”, explains Martínez-Medina. In the future, the knowledge about beneficial fungi could also help to develop sustainable solutions for agriculture, the scientist says: “Inoculants based on these beneficial microbes help to ‘immunize’ the plants against pathogens and pests, thereby reducing yield losses due to infections, in a sustainable way.” Interestingly, the fungus-induced resistance is a plastic phenomenon. This means that it adapts according to the stage of the nematode infection: in the beginning, the fungus boosts salicylic-dependent defences in the roots, leading to higher resistance against the nematode invasion. Subsequently, during the nematode feeding stage, the fungus increases plant defences regulated by jasmonic acid, leading to reduced nematode development and reproduction. Tabea TurriniPublication: Martínez-Medina, A., Fernandez, I., Lok, G. B., Pozo, M. J., Pieterse, C. M. J. and Van Wees, S. C. M. (2016), Shifting from priming of salicylic acid- to jasmonic acid-regulated defences by Trichoderma protects tomato against the root knot nematode Meloidogyne incognita. New Phytol. doi:10.1111/nph.14251
http://dx.doi.org/10.1111/nph.14251Funding: This research was supported by Marie Curie Fellowship 301662 (to A.M-M.), VIDI grant 11281 from the Netherlands Organization of Scientific Research (to S.C.M.V.W.), and ERC Advanced Grant 269072 (to C.M.J.P.). Link to audio recording of an interview with Ainhoa Martinez-Medina on the New Phytologist website: http://www.newphytologist.org/blog/with-a-little-help-from-my-fungus/Further information:Dr. Ainhoa Martínez-Medina (only English and Spanish)
Postdoctoral researcher at the Department Molecular Interaction Ecology at the German Centre for Integrative Biodiversity Research (iDiv) and the Friedrich-Schiller-University Jena (FSU).
Tel: +49 341 9733163
Mobile number on request, please contact iDiv media relations.
Web: https://www.idiv.de/the-centre/employees/details/eshow/martinez-medina-ainhoa.htmlandDr. Tabea Turrini (English and German)
Media Relations iDiv
Tel.: +49 341 9733 106
Web: http://www.idiv.de/de/presse/mitarbeiterinnen.html
« back to Archive 2016
Share this site on: