How plants conquer the world 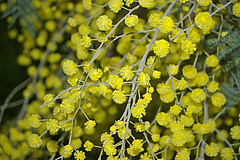 Silver wattle (Acacia dealbata) is native to southeastern Australia but now widely introduced in the Mediterranean which has a similar climate. Photo: Bidgee / Wikimedia (CC BY 3.0)

Note for the media: Use of the pictures provided by iDiv is permitted for reports related to this media release only, and under the condition that credit is given to the picture originator.
Konstanz. A study led by ecologists from the University of Konstanz shows that plants able to produce seeds without mates or pollinators are more likely to naturalize outside their natural range, and thus can spread more easily around the world. The results of the collaboration project of the Konstanz biologists Dr Mialy Razanajatovo and Dr Noëlie Maurel, who work in the research team of Professor Mark van Kleunen, and international expert colleagues were published in the prestigious journal Nature Communications on 28 October. Dr Marten Winter of iDiv was also involved. He is co-founder of the Global Naturalized Alien Flora database (GloNAF). More than 13,000 plant species have, due to humans, spread outside their original geographic ranges, where they now grow and reproduce in the wild. As some of these naturalized alien species threaten native biodiversity, there is large interest in finding plant traits that drive the naturalization of alien species. So far, only few traits universally associated with naturalization success have been detected. For her doctoral thesis, Mialy Razanajatovo worked her way through thousands of research papers to extract quantitative data from so-called breeding-system experiments on the ability of plants to self-fertilize. She found such data for a total of 1,752 plant species, and combined them with data on naturalized plant species. The data for this project are from the Global Naturalized Alien Flora database (GloNAF), recently compiled by Mark van Kleunen's team and published in Nature on 19 August 2015. Unlike most animals, most plants are hermaphroditic, which means that they have both male and female reproductive organs, allowing for self-fertilization. Selfing ability is more prevalent among short-lived plants that reproduce only once in their life time than among long-lived plants, and might also positively affect the size of a species’ native range. Both longevity and native range size might also affect naturalization success. This makes it difficult to determine the actual influence the selfing ability has on naturalization success. A novel aspect of the study by Mialy Razanajatovo and colleagues is that, with the help of statistics, they can clearly identify if there is a direct or indirect relationship between a plant’s selfing ability and its naturalization success. If the relationship between a plant’s selfing ability and its naturalization is indirect only, the selfing ability does not determine its naturalization ability and is therefore not a suitable characteristic to determine the naturalization potential of a plant. The study revealed that the apparent relationship between a plant’s selfing ability and whether or not it has naturalized somewhere in the world outside its native range is statistically completely mediated by longevity and native range size. The size of the global naturalized range is, however, also directly driven by selfing ability. Therefore, the authors conclude that a high selfing ability make the plants less dependent on the presence of mates and pollinators, and thereby allows the plants to establish in many regions. Facts: The study was compiled with support from biologists from the University of Durham, the University of Vienna, the Czech Academy of Sciences, the German Centre for Integrative Biodiversity Research (iDiv) and the University of Göttingen. It was part of Mialy Razanajatovo's doctoral thesis and was financially supported by the German Research Foundation (DFG) – as was the entire project Global Naturalized Alien Flora (GloNAF) run by Professor Mark van Kleunen's research team. Now Mialy Razanajatovo is a postdoctoral researcher in the team of Mark van Kleunen. She had a scholarship for postdoctoral researchers by the Equal Opportunity Council at the University of Konstanz. Original publication: Mialy Razanajatovo, Noëlie Maurel, Wayne Dawson, Franz Essl, Holger Kreft, Jan Pergl, Petr Pyšek, Patrick Weigelt, Marten Winter & Mark van Kleunen: Plants capable of selfing are more likely to become naturalized. Nature Communications, 28th October 2016. DOI 10.1038/NCOMMS13313
http://dx.doi.org/10.1038/NCOMMS13313Links: Global Naturalized Alien Flora database (GloNAF): https://glonaf.org/Contacts: Professor Mark van Kleunen, University of Konstanz
Phone: +49 (0)7531 88 2997
https://cms.uni-konstanz.de/vkleunen/contact/ and Dr Marten Winter, iDiv
Phone: +49 (0)341 9733129
https://www.idiv.de/en/the-centre/employees/details/eshow/winter-marten.html
« back to Archive 2016
Share this site on: