Life on the edge is dangerous 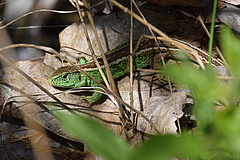 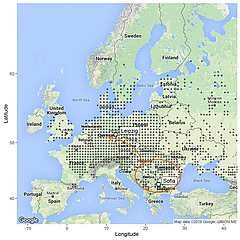 The range of the sand lizard reaches from France to Lake Baikal and from Sweden to the Balkans. The researchers investigated populations on the edge (Sofia region) and in the middle (Leipzig region). Photo: Google 2016, ORION-ME, Editing: UFZ

Note for the media: Use of the pictures provided by iDiv is permitted for reports related to this media release only, and under the condition that credit is given to the picture originator.
Leipzig. Intensive farming, sprawling towns, and dense road networks – the modern world leaves less and less space for animals and plants. Consequently, these species are forced to contend with shrinking refuges that are also becoming further apart. But not all react equally sensitively, which is even true for members of the same species, as demonstrated by a new study of the UFZ and Leipzig University in the scientific journal Landscape Ecology. According to the study, animals living on the edge of their range suffer more from the fragmentation of their habitat than their fellows in the centre. The study was led by iDiv members Prof Klaus Henle of UFZ und Prof Martin Schlegel of Leipzig University. Read more in the press release of UFZ: http://www.ufz.de/index.php?en=36336&webc_pm=40/2016Publication:
Klaus Henle, Claudia Andres, Detlef Bernhard, Annegret Grimm, Pavel Stoev, Nikolay Tzankov, Martin Schlegel (2016): Are species genetically more sensitive to habitat fragmentation on the periphery of their range compared to the core? A case study on the sand lizard (Lacerta agilis); Landscape Ecology, online edition
http://link.springer.com/article/10.1007/s10980-016-0418-2
« back to Archive 2016
Share this site on: