Study: bees are more productive in the city than in surrounding regions 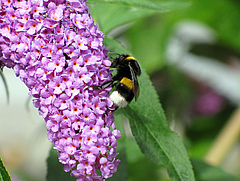 Note for the media: Use of the pictures provided by iDiv is permitted for reports related to this media release only, and under the condition that credit is given to the picture originator.
Researchers sought to understand whether there was a link between human land use and the pollination of plants by wild bees. To find out, they placed plants at nine locations in and around Halle (Saale). The plants had been specially grown in a greenhouse at the UFZ’s field testing station in Bad Lauchstädt and, up until this point, had had no contact to the environment – or to wild bees or other pollinators. The nine sites were located either directly in the centre of Halle or in agricultural areas outside of the city. During flowering time, the researchers recorded which insects visited the plants and how frequently they did so. The scientists also captured bees at the study sites and examined them for two parasites which primarily affect the bees’ digestive tract and which lower the life expectancy of the animals.   The results of the two investigations: plants are more often pollinated by insects, especially bumblebees, in urban areas than in areas used more for agriculture. At the same time, the researchers found more parasites in the bees that were captured inside the city. “Parasites are a normal element of natural ecosystems. In this respect, there is nothing bad about this observation,” explains Panagiotis Theodorou, lead author of the study and PhD student at the Institute of Biology at MLU. Even though there are more parasites in urban areas, bees do not pollinate plants any worse. “The study also vividly shows how poor conditions are for the wild bees and the plants they pollinate in the modern farmed environment,” says Professor Robert Paxton, professor of biology at MLU, whose working group led the study. In contrast, conditions in urban areas are considerably better: people in urban areas cultivate more flowers which increases plant diversity and attracts more bees – even though these bees have a higher risk of catching more parasites in cities. “The fact that bumble bees are highly-efficient pollinators, even though they are infected by parasites, is probably, because the parasite-pollinator-plant system could develop for millions of years. The significant speed with which agricultural landscapes and their use changed over the last years does not allow for similar adaptions, which could be one of the main reasons for the currently observed decline in wild bees and other pollinators”, says Dr Oliver Schweiger at UFZ. The research group from Halle will now investigate how the findings of their study on parasite infection in bumblebees can be transferred to other wild bees and honeybees. About the publication:
Theodorou P, Radzeviciute R, Settele J, Schweiger O, Murray TE, Paxton RJ. 2016 Pollination services enhanced with urbanization despite increasing pollinator parasitism. Proc. R. Soc. B 20160561. http://dx.doi.org/10.1098/rspb.2016.0561Contacts:
Panagiotis Theodorou (MLU)
Tel.: +49 345 55-26502
Mail: panagiotis.theodorou@student.uni-halle.de Prof. Dr. Robert Paxton (MLU)
Tel.: +49 345 55-26451
Mail: robert.paxton@zoologie.uni-halle.de Dr. Oliver Schweiger (UFZ)
Tel.: +49 345 558-5306
Mail: oliver.schweiger@ufz.de
« back to Archive 2016
Share this site on: