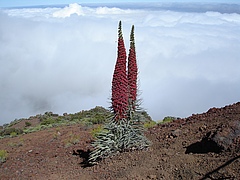 One of the most impressive examples of woodiness on the Canary Islands is offered by Wildpret's viper's bugloss (Echium wildpretii subsp. Wildpretii). The species is found exclusively on the high flanks of the Teide volcano on Tenerife. (Picture: Frederic Lens/ Naturalis Biodiversity Centre in Leiden)

Based on a media release from Philipps-Universität Marburg.

Marburg/Leipzig/Leiden. Increased drought, the lack of predators and isolation lead to a tendency of plants on islands to become woody. The location of the islands on which the species concerned are native also plays a role. This is the result of a study led by the Philipps University of Marburg and the German Centre for Integrative Biodiversity Research (iDiv) together with the Naturalis Biodiversity Centre in Leiden and other institutions. The study by the German-Dutch research team, which has now been published in the scientific journal PNAS, shows how islands act as natural laboratories of evolution.

This text is only available in German.