Improving predictions of the effects of climate change on ecosystems 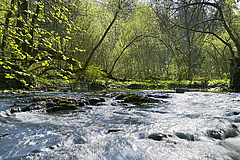 How can we preserve the functioning and services of our ecosystems in the future? Using process-based ecological models that accommodate key biological mechanisms, scientists are attempting to better understand and predict climate-change-related alterations in biodiversity and resulting ecosystem functions. Photo: André Künzelmann, UFZ

Leipzig. Climate change will alter our ecosystems. Using ecological models, researchers are attempting to predict what kind of changes we can expect to see. Up to now, however, these predictions have not been accurate enough. An international team including researchers from the Helmholtz Centre for Environmental Research (UFZ) and the German Centre for Integrative Biodiversity Research (iDiv) examined how to improve the predictive capacity of the models. Their recommendations are summarised in the latest issue of the journal Science.

Climate change will inevitably have far-reaching consequences for the Earth's ecosystems. But how ecosystems will react and adapt remains unclear. “So far we haven’t been able to sufficiently determine what species composition future ecosystems will have, and how their functions and services for mankind will change,” said Dr. Karin Johst of the UFZ. “This is because current ecological models often do not include important biological processes and mechanisms: so far only 23 percent of the reviewed studies have taken into account biological mechanisms.”

As part of the synthesis working group sRangeShifter at iDiv, an international team of scientists has identified six key biological mechanisms which need to be included in future “process-based” ecological models to improve their predictive capacity. “One key mechanism concerns species dispersal, that is, whether species can find their way to new and better habitats as environmental conditions change, and if so, how quickly they can do so,” explains Dr. Guy Pe’er, another UFZ scientist involved in the study. “Yet the capacity to spread is not enough: consideration must be given also to a second key mechanism which is interaction with other species. For example, if a butterfly relies on a particular host plant to lay its eggs on, but that plant hasn’t yet reached the new habitat, the butterfly would not survive there. Unless a third key mechanism, evolution, comes into play: in some rare cases, the butterfly might be able to adapt to a new host plant”.

Climate change entails not only temperature rise but also other aspects such as fluctuations in rainfall and increased drought. These could affect the life-cycle of species, or number of offspring they manage to produce (key mechanism 4: demographics); or they could affect the energy budget, e.g. if more energy is needed to regulate body temperature or find increasingly scarce food sources (key mechanism 5: physiology). Finally, changes in the environmental conditions (key mechanism 6: “abiotic environment”), e.g. temperature, humidity and availability of nutrients, affect different species very differently. “We know that certain biological mechanisms play a disproportionate role in determining how species respond to climate change. Therefore if we want to predict future biodiversity changes then we need to build models that incorporate those parts of biology that matter the most“, says Professor Mark C. Urban from the University of Connecticut, who led the study published now in the Science magazine. Ecosystems are very complex structures, whose functioning depends on the interplay of abiotic environmental conditions and biological processes and mechanisms. By including the key mechanisms, future models can lead to a breakthrough in understanding this interplay, and make more accurate predictions on how our ecosystems are affected by climate change and how this alters their functioning and services. This is a key step for mitigating harmful effects.

But there is still a long way to go, as input data are lacking to support such high-end process-based models. Data collection is currently limited to monitoring the ecological effects of climate change such as the extinction of native species or the invasion of exotic ones. But this kind of data does not cover the key mechanisms identified by the authors, and consequently cannot be used for making better predictions. Moreover, with more than 8.7 million species worldwide, gathering the necessary biological information is a daunting task. “Our biggest challenge is pinpointing which species to concentrate on and which regions we need to allocate resources to,” says Urban. “We are at a triage stage at this point. We have limited resources and patients lined up at the door.” According to the authors, globally coordinated efforts to collect the necessary biological data and parallel development of such process-based models is urgently needed for closing key gaps in knowledge, significantly boosting the quality of ecological models, and markedly improving their predictive capacity.

“We could take some lessons from the development of climate models, which over the past few decades pushed forward climate research toward improved predictions by adopting more advanced tools and applying detailed information that is gathered, coordinated, and shared on a global scale”, said Pe’er. With better knowledge of how species and ecosystems react to global changes, we can take more meaningful measures – both ecologically and economically – to protect and preserve them and their functions, which serves as the basis for our very existence.