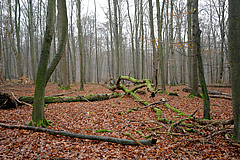 Thuringia's Hainich National Park was one of 200 forests across six European countries which were investigated as part of the study. Photo: Tobias Wagner, iDiv

Forest homogenisation results in a lower ecosystem performance. This summarises the findings of an international team of scientists from 29 institutions, including researchers from Martin Luther University Halle-Wittenberg (MLU), Leipzig University and the German Centre for Integrative Biodiversity Research (iDiv). The scientists were able to demonstrate that species-rich forest stands give rise to a higher number and more varied range of services than those with fewer species. 200 forests across six European countries were investigated as part of the study. The findings have now been published in the renowned scientific journals "PNAS" and "Nature Communications".

Trees are service providers acting on behalf of mankind: they filter dust from the air, turn carbon dioxide into oxygen, protect the ground from erosion, help ensure the supply of drinking water and provide wood for construction and heating. Humans also use the forests for sport and recreation. However, the majority of European forests merely consist of one or just a handful of tree species. The team of researchers involved in the EU project "FunDivEurope – functional significance of forest biodiversity", coordinated by Professor Michael Scherer-Lorenzen from the Albert Ludwig University of Freiburg, was therefore tasked with investigating the correlation between local and regional biodiversity as well as ecosystem services, based on European forests of a range of climates.

One thing was clear: species-rich forests offer more services than those with fewer species. This means that forests which form part of stands made up of different species also give rise to a more varied range of services than homogenous forests. "As part of this large-scale study, we were able to demonstrate for the first time the importance of biological diversity to nature and humans, on larger spatial scales," said Professor Helge Bruelheide, geobotanist at the MLU and co-director of the iDiv, who coordinated the research in the German investigation sites in Thuringia's Hainich National Park. Professor Christian Wirth, professor at Leipzig University and managing director of the iDiv, was also involved in the major European biodiversity project.

In their publication, the team of scientists highlight that a biodiversity deficit in European forests goes hand in hand with significant losses in services for nature and mankind. The lead author of the study, Dr Fons van der Plas from the Senckenberg Biodiversity and Climate Research Centre in Frankfurt (Main), summarised the findings of the work as follows: "One tree species is indeed able to provide individual services, for example high quality wood. However, a plethora of services – such as a habitat for birds, an attractive destination for tourists and a place in which to preserve water – can only be achieved by a diverse forest." This diversity, van der Plas went on, could very easily be increased. "In principle, it is not difficult to support natural seed dispersal and varied young growth, to plant additional species and to vary how species are put together in large woodlands, yet it is simply not done enough."

Transforming European forests into mixed stands would also pay off economically in the long term, add the two iDiv scientists Helge Bruelheide and Christian Wirth, as a diversity of tree species would also act as a kind of insurance against the increasing risks of global change.

The research leading to these results received funding from the European Union Seventh Framework Programme (FP7/2007-2013) under Grant Agreement 265171.

iDiv is a central facility of the University of Leipzig within the meaning of Section 92 (1) of the Act on Academic Freedom in Higher Education in Saxony (Sächsisches Hochschul­freiheitsgesetz, SächsHSFG). It is run together with the Martin Luther University Halle-Wittenberg and the Friedrich Schiller University Jena, as well as in cooperation with the Helmholtz Centre for Environmental Research – UFZ.