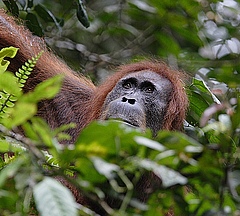 Sumatran orangutans, one of the two existing species of orangutans, live exclusively in the North of the Indonesian island Sumatra. © Perry van Duijnhoven 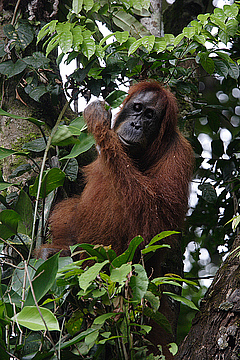 The Sumatran orangutans are threatened by the loss of their natural habitat. © Perry van Duijnhoven 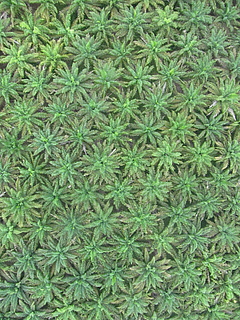 The habitat of the orangs is being converted for agricultural purposes, like plantation of oil palms. © Conservationdrones.org

Sumatran orangutans, one of the two existing species of orangutans, live exclusively in the North of the Indonesian island Sumatra and are critically endangered. This great ape is threatened by poaching and forest loss, as its habitat is being converted for agricultural purposes. An international team of researchers has now conducted an extensive series of surveys to estimate the number of Sumatran orangutans. They discovered that about 14,600 of these animals still live in the wild today – 8,000 more than previously thought. Good news, however, the increase in numbers is due to a more wide-ranging survey effort and not to an increase in the orangutan population. Moreover, should the deforestation of the orangs’ habitat go ahead as planned, as many as 4,500 individuals could vanish by 2030. The researchers thus urge Sumatran national and provincial legislation to implement measures to avoid negative impacts on forests where orangutans occur.

An accurate estimation of population size is crucial for planning future conservation activities effectively. Therefore,  to cover the species’ complete range, researchers from Europe and Indonesia have conducted surveys during which they counted more than 3,000 orangutan nests on more than 200 line transects covering more than 300 kilometres, equalling approximately to 14,600 Sumatran orangutans. A previous estimate found that 6,600 Sumatran orangutans lived in Northern Sumatra, a number that did not include orangs living at higher elevations, in logged forests and in areas west of Lake Toba.

The researchers then examined several future deforestation scenarios based on actual land-use plans in the area using computer simulation. Their analyses show that as many as 4,500 orangutans could disappear by 2030 should these plans be implemented. Therefore, even though the higher population estimate is good news, orangutan numbers are expected to increasingly decline in the long run if deforestation continues at its current pace.

“It was very exciting to find out that there are more Sumatran orangutans than we thought, but this does not mean that we can be complacent,” says Serge Wich of Liverpool John Moores University. “Numerous development projects are planned in the area that – if they are not stopped – could sharply reduce the number of orangutans over the coming years.”

Wich adds: “We will need to continue to work together with the Indonesian government and other parties to ensure that this scenario will not happen. A difficult task, but we all hope that we can turn the tide for the Sumatran orangutan. We would like to see appropriate environmental impact assessments conducted for all developmental planning that concerns forests in the orangutan range so that disruption to their habitat may be avoided or reduced to a minimum.”

“The Sumatran orangutans are the first ape taxon for which estimates of population size have changed considerably when taking a closer look and they are likely not the last one”, says project leader Hjalmar Kuehl of the Max Planck Institute for Evolutionary Anthropology and the German Centre for Integrative Biodiversity Research (iDiv). “Given the rapid development in field and analytical methods, we will likely see upwards or downwards corrections of the estimated population sizes for several of the other 12 ape taxa in the years to come. This will help us to better inform conservation policy and management and provide guidance for the improved protection of great apes.”