Subsurface CO2 storage: Risks for Biogeochemical Cycles in the Soil 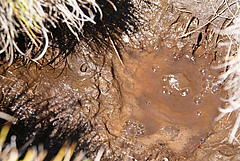 For their study the researchers analyzed soil organisms and bio¬geo-che¬mical cycles in a natural source of carbon dioxide (mofette) and in a comparative soil. Photo: Felix Beulig, FSU

Jena. A high concentration of carbon dioxide gas in the soil can change the community of organisms living in the soil in the long term. At the same time it changes processes in this ecosystem like the subterranean carbon cycle and carbon storage. These are the research results of a team from the Universities of Jena and Greifs­wald (Germany), Vienna (Austria), Oslo (Norway), the Max-Planck-Institute for Biogeochemistry and the German Centre for Integra­tive Biodiversity Research (iDiv), both Germany. The results are published in the first edition of the science journal “Nature Micro­biology”.

For their study the researchers analyzed soil organisms and bio­geo­che­mical cycles in a natural source of carbon dioxide (mofette) and in a comparative soil. The results allow conclusions about the impact of possible leaks in a subterranean CO2 storage, which could possibly change the food web and the metabolism in the subsurface.

The more clearly the dimensions of global warming become visible, the greater is the pressure to find possible ways to avoid a further increase in the concentration of carbon dioxide (CO2) in the atmosphere. At the same time the stripping and subterranean storage of this greenhouse gas is being discussed. But what would the impact and the risks of such storage be?

The result of what would happen if such storage leaked can be demonstra­ted by practical experiments. Therefore in the last few years a small valley in the Czech spa triangle became a kind of open air labo­ratory. Here is why: In this location, CO2 streams in so-called mofettes in large amounts naturally from the depths. The impact of high CO2 con­cen­trations can be studied based on the after-effects of volcanicity, with­out human beings having to interfere with nature. Health spas like Karlovy Vary (Karlsbad), Mariánské Lázne (Marienbad) or Františkovy Lázně (Franzensbad), and also the spa towns of Bad Elster and Bad Bram­bach in Saxony owe their existence to the volcanic activity of earlier times.

A team of scientists under the leadership of Prof. Kirsten Küsel from the chair for Aquatic Geomicrobiology of the Friedrich Schiller University Jena (Germany) had a close look at the soil area around a mofette, in which the air consisted of nearly pure CO2. From 2012 to 2014 the re­searchers collected samples three times per year. They then compared them with samples from a comparative soil without increased CO2 concentration that was only a few meters away. “In the soil of the mo­fette we found significantly more organic material – remains of dead plants and animals, which are normally decomposed by small soil ani­mals and single-cell organisms, bacteria and fungi,“ reports Dr. Felix Beulig of the Friedrich Schiller University Jena, who meanwhile works at the University Aarhus in Denmark. By means of modern chemical and molecular biological methods the researchers were able to discover the mechanism which triggered this change: The CO2 had changed the living conditions in the soil so much, that the soil animals were excluded and the community of microorganisms had moved towards less manifold but more highly specialised species. Thus the food web in the soil be­came less efficient in the degradation of organic material which then had accumulated in the ground. Moreover, isotopic measurements were able to show that in the organic soil material large amounts of carbon originated from the earth's mantle. Plants and microorganisms had ear­lier absorbed this from the leaking CO2.

So-called 'omics'-methods allowed the researchers to take into account the whole genetic information of all soil creatures (DNA and RNA) in their analysis. Moreover the team could assess which genetic informa­tion was actively used at the time. Thus conclusions could be drawn considering those biogeochemical cycles in the soil which influence the storage  and the degradation of organic carbon. “From our results we can draw the conclusion that extremely high concentrations of carbon dioxide will change the food web and the metabolism in the soil in the long term,“ Prof. Kirsten Küsel of the University of Jena and the iDiv explains. The comprehensive analysis with a combination of 'omics'- and biogeochemical methods was also pointed out by Prof. Joshua Schimel from the University of California (USA) in a commentary, which was published in the same edition of “Nature Microbiology”.

The analyzed mofette is an extreme habitat that was long considered as being hostile to life. As early as last year, though, the research team was able to show that strongly adapted organisms quite like it there. The new study offered insights into the complex correlations between com­munities of organisms and the carbon dynamic in the soil. The results of the study will help to evaluate the environmental risks of the subter­ranean CO2 storage.

iDiv is a central facility of the University of Leipzig within the meaning of Section 92 (1) of the Act on Academic Freedom in Higher Education in Saxony (Sächsisches Hochschul­freiheitsgesetz, SächsHSFG). It is run together with the Martin Luther University Halle-Wittenberg and the Friedrich Schiller University Jena, as well as in cooperation with the Helmholtz Centre for Environmental Research – UFZ.