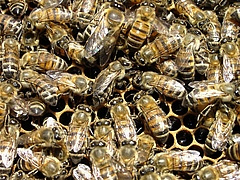 Pesticides and parasites are not responsible for the regional decline of honeybee colonies. Biologists of the Martin Luther University of Halle-Wittenberg (MLU) including the iDiv member scientist World events affected bee colonies more than pesticides have found, that political and socio-economic changes, such as revolutions or civil wars, and the global trade honey play a much bigger role. Their findings are published in the journal "Agriculture, Ecosystems & Environment".