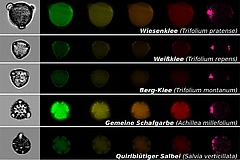 Microscopic images from pollen, which are important for pollinators, obtained by image-based particle analysis. Each row shows a single pollen grain of a specific plant with a normal microscopic image (first image on the left) and fluorescence images for different spectral ranges (colored images on the right). (Picture: Susanne Dunker)

Pollen is produced in a flower’s stamens and consists of a multitude of minute pollen grains, which contain the plant’s male genetic material necessary for its reproduction. The pollen grains get caught in the tiny hairs of nectar-feeding insects as they brush past and are thus transported from flower to flower. Once there, in the ideal scenario, a pollen grain will cling to the sticky stigma of the same plant species, which may then result in fertilisation.

“Although pollinating insects perform this pollen delivery service entirely incidentally, its value is immeasurably high, both ecologically and economically,” says Dr. Susanne Dunker, head of the working group on imaging flow cytometry at the Department for Physiological Diversity at UFZ and iDiv. “Against the background of climate change and the accelerating loss of species, it is particularly important for us to gain a better understanding of these interactions between plants and pollinators.” Pollen analysis is a critical tool in this regard.

Each species of plant has pollen grains of a characteristic shape, surface structure and size. When it comes to identifying and counting pollen grains – measuring between 10 and 180 micrometres – in a sample, microscopy has long been considered the gold standard. However, working with a microscope requires a great deal of expertise and is very time-consuming. “Although various approaches have already been proposed for the automation of pollen analysis, these methods are either unable to differentiate between closely related species or do not deliver quantitative findings about the number of pollen grains contained in a sample,” continues biologist Dr. Dunker. Yet it is precisely this information that is critical to many research subjects, such as the interaction between plants and pollinators.

In their latest study, Susanne Dunker and her team of researchers have developed a novel method for the automation of pollen analysis. To this end they combined the high throughput of imaging flow cytometry – a technique used for particle analysis – with a form of artificial intelligence (AI) known as deep learning to design a highly efficient analysis tool, which makes it possible to both accurately identify the species and quantify the pollen grains contained in a sample. Imaging flow cytometry is a process that is primarily used in the medical field to analyse blood cells but is now also being repurposed for pollen analysis.

“A pollen sample for examination is first added to a carrier liquid, which then flows through a channel that becomes increasingly narrow,” says Susanne Dunker, explaining the procedure. “The narrowing of the channel causes the pollen grains to separate and line up as if they are on a string of pearls, so that each one passes through the built-in microscope element on its own and images of up to 2,000 individual pollen grains can be captured per second.” Two normal microscopic images are taken plus ten fluorescence microscopic images per grain of pollen. When excited with light radiated at certain wavelengths by a laser, the pollen grains themselves emit light. “The area of the colour spectrum in which the pollen fluoresces – and at which precise location – is sometimes very specific. This information provides us with additional traits that can help identify the individual plant species,” reports Susanne Dunker.

In the deep learning process, an algorithm works in successive steps to abstract the original pixels of an image to a greater and greater degree in order to finally extract the species-specific characteristics. “Microscopic images, fluorescence characteristics and high throughput have never been used in combination for pollen analysis before – this really is an absolute first.” Where the analysis of a relatively straightforward sample takes, for example, four hours under the microscope, the new process takes just 20 minutes. UFZ has therefore applied for a patent for the novel high-throughput analysis method, with its inventor, Susanne Dunker, receiving the UFZ Technology Transfer Award in 2019.

The pollen samples examined in the study came from 35 species of meadow plants, including yarrow, sage, thyme and various species of clover such as white, mountain and red clover. In total, the researchers prepared around 430,000 images, which formed the basis for a data set. In cooperation with TU Ilmenau, this data set was then transferred using deep learning into a highly efficient tool for pollen identification. In subsequent analyses, the researchers tested the accuracy of their new method, comparing unknown pollen samples from the 35 plant species against the data set. “The result was more than satisfactory – the level of accuracy was 96 per cent,” says Susanne Dunker. Even species that are difficult to distinguish from one another, and indeed present experts with a challenge under the microscope, could be reliably identified. The new method is therefore not only extremely fast but also highly precise.

In the future, the new process for automated pollen analysis will play a key role in answering critical research questions about interactions between plants and pollinators. How important are certain pollinators like bees, flies and bumblebees for particular plant species? What would be the consequences of losing a species of pollinating insect or a plant? “We are now able to evaluate pollen samples on a large scale, both qualitatively and– at the same time – quantitatively. We are constantly expanding our pollen data set of insect-pollinated plants for that purpose,” comments Susanne Dunker. She aims to expand the data set to include at least those 500 plant species whose pollen is significant as a food source for honeybees.