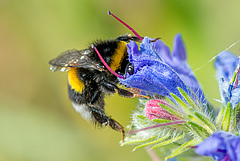 New study suggests it does, making them better pollinators, too.

Based on a media release of the Martin Luther University Halle-Wittenberg.

Leipzig/Halle. Does urbanisation drive bumblebee evolution? A new study by Martin Luther University Halle-Wittenberg (MLU) and the German Centre for Integrative Biodiversity Research (iDiv) provides an initial indication of this. According to the study, bumblebees are larger in cities and, therefore, more productive than their rural counterparts. In Evolutionary Applications, the research team reports that differences in body size maybe caused by the increasingly fragmented habitats in cities.

Over the last 200 years, the habitat of bumblebees and other insects has changed dramatically. Now they are less likely to live in rural areas but more likely to be surrounded by roads and concrete walls. “Living in a city can have both benefits and disadvantages for bumblebees. One the one hand, residential gardens and balconies, allotment gardens, botanical gardens and city parks provide rich food sources for bumblebees. On the other hand, cities are significantly warmer than their surrounding rural areas. In addition, impervious surfaces, streets and large buildings create considerably smaller habitats that are isolated from one another. These might pose a challenge to bumblebees,” said Dr Panagiotis Theodorou from the Institute of Biology at MLU, who led the research at MLU and iDiv.

The team of biologists at MLU wanted to find out whether urbanisation is associated with shifts in bumblebee body size with consequences on the ecosystem service of pollination they provide. The scientists collected more than 1,800 bumblebees in nine German metropolitan areas and their rural surroundings and used potted red clover plants as reference for pollination in all locations. Their work concentrated on three locally common bumblebee species: the red-tailed bumblebee (Bombus lapidarius), the common carder bee (Bombus pascuorum) and the buff-tailed bumblebee (Bombus terrestris). The researchers measured the body size of every bumblebee they caught and counted the number of seeds produced per red clover plant. “Our results show that bumblebees from more fragmented urban areas were larger compared to their rural counterparts, by around four percent,” said biologist Dr Antonella Soro from MLU. The results were similar for all three bumblebee species.

Body size is linked to an organism’s metabolism, life history, space use and dispersal as well as a major determinant of species interactions, including pollination. “Larger bumblebees can see better, they have larger brains and they are better in learning and memory. They are also less likely to be attacked by predators and can travel greater distances, which is an advantage in a fragmented landscape such as the urban one. In addition, large bumblebees visit more flowers per flight and are capable of depositing a higher number of pollen grains on stigmas, which makes them better pollinators,” said Soro. This might be the explanation of the positive relationship between body size and pollination documented by the researchers. The study gives an indication that the severity of habitat fragmentation could impact a bumblebee’s body size and thus also indirectly influence pollination. According to Theodorou, there are still a lot of open questions regarding the effects of urban-related environmental changes on bees and pollination. Therefore, the team points to the importance of further studies to better understand the evolutionary responses of bees to urbanisation, information that can help improve urban planning.