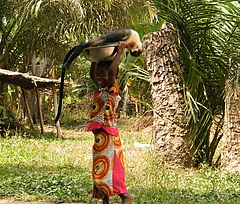 To make wildlife trade more sustainable, it is essential to know and understand the reasons why people hunt and consume bushmeat. (Picture: Wild Chimpanzee Foundation) 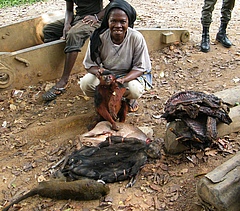 Millions of people, especially in the Global South, depend on wild meat for their livelihoods.  (Picture: Wild Chimpanzee Foundation)

Leipzig. Extensive wildlife trade not only threatens species worldwide but can also lead to the transmission of zoonotic diseases. It encompasses hundreds of species with significant differences in their conservation status and associated disease risk. However, current strategies to mitigate the wildlife trade often neglect these differences. An international research team led by the German Centre for Integrative Biodiversity Research (iDiv) and the Max Planck Institute for Evolutionary Anthropology (MPI-EVA) shed new light on the motivations why people hunt, trade or consume different species. The research has been published in the journal People and Nature and shows that more differentiated solutions are needed to prevent uncontrolled disease emergence and species decline.

Covid-19 and the associated global economic, health and societal distortions have shed light on the alarming threat of infectious diseases emerging at an increasing rate. Around 60 percent of emergent infectious diseases are zoonotic, originating in animals; among the most prominent are SARS, MERS, Ebola, HIV and Covid-19. More than two-thirds of those originate in wild species. Many voices have called for higher restrictions or even a blanket ban on the wildlife trade. This demand is also fuelled by the devastating effects of unsustainable hunting that threatens hundreds of species.

However, millions of people, especially in the Global South, depend on wild meat (“bushmeat”) for their livelihoods. Hunting and consuming wild meat is a vital part of their culture. Therefore, current strategies often aim at trade regulations, rather than the enforcement of strict bans. Even though species vary in their conservation value and their associated risk of transmitting zoonotic diseases, little is known about the reasons why people choose a certain species. "In order to make wildlife trade more sustainable, to prevent uncontrolled disease emergence and species decline, it is essential to know and understand these reasons, and I was surprised how little information existed on these”, explains lead author Mona Bachmann, doctoral researcher at iDiv and MPI-EVA.

An international research team led by Mona Bachmann and Hjalmar Kühl from MPI-EVA and iDiv, studied a wildlife trading network in Côte d'Ivoire, West Africa. Since the wildlife trade is mostly illegal, people often hesitate to share information. With the help of local, trustable informants, often hunters or bushmeat traders themselves, the researchers were able to break the ice. Around 350 hunters, 200 bushmeat traders and 1,000 bushmeat consumers provided detailed insights into the wildlife trade and contributed to one of the most comprehensive data sets for a wildlife trading network to date.

In Sub-Saharan Africa alone, bushmeat trade encompasses over 500 species – from rats to elephants. Around 80 percent of the bushmeat biomass harvested in this region consists of fast-reproducing generalists like rodents, small-bodied duikers or antelopes. These species resist high levels of hunting and are a crucial component of livelihoods throughout rural areas. Replacing them with alternative animal proteins could substantially increase the exploitation of fish stocks or lead to habitat degradation to provide grazing land. Species that produce fewer offspring, like many primates, are threatened by even low levels of hunting. Since they are comparatively rare, they usually represent only a small percentage of a hunters' catch. Additionally, different risks of zoonotic disease transmission are associated with those species. In general, proximity with humans – either in the phylogenetic sense, like many primates, or in the spatial sense, like rodents in areas highly populated by humans – can increase the risk of transmitting diseases.

Most strategies aim at reducing wild meat in general, irrespective how common a species is or how likely it will transmit diseases. However, people might use species for different purposes. If mitigation strategies neglect this fact, rare species of greater conservation relevance that contribute little to the total bushmeat biomass, like many primates or disease-prone-species, would likely be overlooked.

Why people use bushmeat and how to tackle their motivations

According to the study, preferences for bushmeat differed widely between hunters, bushmeat traders and consumers, and so does their motivation. People hunt for monetary, nutritional, educational and cultural reasons. Primates, for example, were mostly targeted by commercial hunters for profit and consumed as a luxury meat, while rodents were hunted and consumed when alternative proteins like fish or domestic meat were lacking. Interestingly, hunters and consumers who were aware of the negative ecological consequences of unsustainable bushmeat hunting targeted or consumed primates less. In contrast, bushmeat traders did not change their behaviour.

Broadly applied mitigation approaches are often development-based, educational or cultural. The results show that these interventions may address taxa like rodents, duikers or primates differently. Also, different responses by the individual user groups of hunters, traders or consumers are to be expected.

"Up to 60 percent of the consumed meat was from rodents and only seven percent from primates," says Bachmann. "If we considered bushmeat as one generic good, we would have probably identified a lack of protein as the main reason for its use and had thus recommended development-related projects. However, primates were consumed irrespective of the availability of proteins, and economic development could even increase economic resources to purchase the desired luxury product. Hence, to protect primates, development-related strategies need to be complemented by educational strategies."

The researchers, therefore, urge policy makers to prioritize planning processes: Clear goals, like conservation, development or disease prevention, have to be set. Assessments need to identify the behaviour causing problems, the user group and its motivations first. Knowledge and tools from disciplines such as psychology or marketing may optimize campaigns.

"Scientists and practitioners in conservation often rush to find quick solutions because every delay comes at high cost," says Bachmann. "In West and Central Africa, this often leads to one-size-fits-all solutions. However, our results suggest that many conservation strategies may be tailored to fit the wrong targets. Poor planning not only hampers the effectiveness of strategies but can also cause harm and waste the already scarce resources available for biodiversity protection.” Hjalmar Kühl adds: “If we really want to solve the problem of the overexploitation of wildlife and reduce the threats associated with it, for species conservation and human well-being, we need to tackle it at its roots. We cannot continue ignoring this problem, but we need to invest resources and develop strategies that really help to create a more sustainable human-wildlife co-existence.”