Numbers of reef fish species vary between ecoregions. But some differences only show when looking at large areas 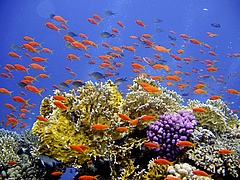 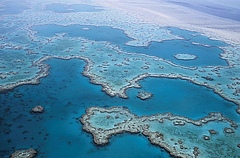 The “coral triangle” near Australia is a hotpot of fish species richness. (Photo: Pixabay)

Leipzig/Halle. The numbers of reef fish species (“species richness”) are known to decrease from the Tropics to colder latitudes, and – to a lesser degree – from the “coral triangle” (near Australia) towards both east and west. However, these two well-known gradients emerge from different underlying component patterns. While the latitudinal gradient can be seen both at small and large scales, the longitudinal gradient only shows at large scales. This is due to site-to-site variations of species compositions (aggregation) in the “coral triangle”.
The study was published in the Proceedings of the Royal Society B and involved by scientists from iDiv, Martin Luther University Halle-Wittenberg and Tel Aviv University. The scientists’ findings have great implications for measuring biodiversity and for conservation practices. In areas where species are more aggregated, protected areas need to be larger.Original publication (iDiv-affiliated scientists in bold):
Shane A. Blowes, Jonathan Belmaker, Jonathan M. Chase (2017): Global reef fish richness gradients emerge from divergent and scale-dependent component changes. Proc. R. Soc. B. DOI: 10.1098/rspb.2017.0947. Published 15 November 2017.
Contact: