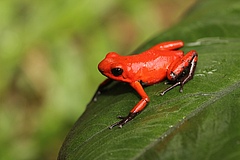 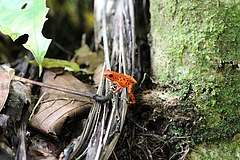 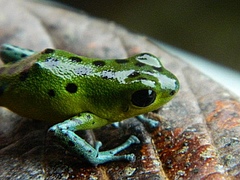 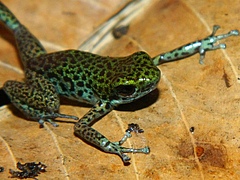 Nevertheless, all the morphs belong to the same species. 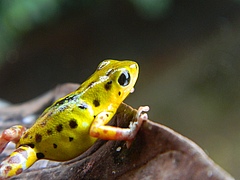 The species belongs to the poison dart frogs (Dendrobatidae). 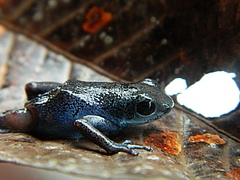 Their intensive colour signals predators to better not eat them.

The first global map of within-species genetic diversity on our planet has been published. Henrique M. Pereira, Professor at iDiv and the Martin Luther University of Halle-Wittenberg, comments on the new study and highlights future research needs in a Science article. Biodiversity is not only about species numbers. It also includes genetic diversity within single species. But while our current knowledge on global species richness is limited, when it comes to genetic diversity we know almost nothing. A first step towards illuminating the black box of genetic diversity has now been achieved by a team led by Andreia Miraldo (University of Copenhagen, Denmark). The scientists have published the first global map of within-species genetic diversity of terrestrial mammals and amphibians in Science. Within the same issue of the journal, Henrique M. Pereira, Professor at iDiv and the Martin Luther University Halle-Wittenberg, comments on the publication by Miraldo et al. Pereira reflects upon the results from an evolutionary perspective, highlights their implications for conservation, and identifies important avenues for future research. As it is the case for species richness, the new study found that also genetic diversity is highest around the equator, i.e., in the tropics, and declines towards the poles, Pereira explains. Interestingly though, this decline is less abrupt for genetic diversity than it is for species richness. In other words, genetic diversity remains at relatively high levels also a bit north and south of the equator. Pereira says that the reason behind this is still unknown and the topic awaits further research. With regard to conservation, Pereira states that global patterns of genetic diversity resemble what is known for species richness: In ecosystems dominated by humans, diversity is lower compared to that in more natural ecosystems. Now, Pereira emphasizes, achieving a better understanding of the drivers that shape genetic biodiversity is of major concern. Only with more knowledge it will be possible to systematically work towards attaining the Target 13 of the Convention on Biological Diversity (CBD) for 2020. The CBD is a multilateral treaty, and its Target 13 regards the maintenance of global genetic diversity. Pereira highlights that now it is crucial to find out if protected areas that were established based on knowledge about species richness also capture genetic biodiversity. Furthermore, it is important to understand how genetic diversity changes over time when humans change ecosystems. Tabea TurriniPerspectives paper by Henrique M. Pereira:http://science.sciencemag.org/content/353/6307/1494.full Henrique M. Pereira: A latitudinal gradient for genetic diversity. Science. 30 Sep 2016 : 1494-1495. Original article by Miraldo et al:http://science.sciencemag.org/content/353/6307/1532.full Andreia Miraldo, Sen Li, Michael K. Borregaard, Alexander Flórez-Rodríguez, Shyam Gopalakrishnan, Mirnesa Rizvanovic, Zhiheng Wang, Carsten Rahbek, Katharine A. Marske, David Nogués-Bravo: An Anthropocene map of genetic diversity. Science. 30 Sep 2016 : 1532-1535. Convention on Biological Diversity:https://www.cbd.int/
« back to Archive 2016
Share this site on: