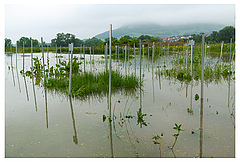 During the flood in June 2013, the Saale burst its banks and flooded the field site of the Jena Experiment. Parts of the areas were up to three weeks completely under water. Photo: Victor Malakhov.

Jena. In grasslands, growing plants in higher diversity fields may help alleviate the negative impacts of flooding. This finding may extend to how we grow important food crops. It is published now in the journal „New Phytologist“.

In the long-term Jena experiment on biodiversity, researchers found that plants in communities with only one single plant species (monocultures) were less able to cope with flooding compared to plants grown in mixtures totaling 16 species. The soil beneath species grown in high diversity mixtures was more porous than beneath monocultures, allowing water to drain faster and maintaining higher levels of oxygen. This pattern applied to all herbs within the experiment, both small and tall species. An exception were grasses, which were unaffected by flooding, and legumes (important nitrogen-fixing plants), which were severely affected by flooding, independent of whether they were grown alone or in mixtures.

“Our finding that biodiversity is a tool that can be used to improve individual plant resilience during a flood is very exciting,” said Dr. Alexandra Wright, lead author of the New Phytologist study. “It extends important plant physiological research on plant traits associated with flood resistance. It also grows on a long body of community ecology research that emphasizes the importance of biodiversity for buffering against the negative effects of climate change." One of the expected effects of climate change is that flooding will increase in frequency and severity in the future.

Alexandra Wright conducted the study in the years 2013 to 2014 as a Postdoctoral Research Associate at iDiv with support through the iDiv Flexpool. At current she is an Assistant Professor at the FIT – State University of New York.