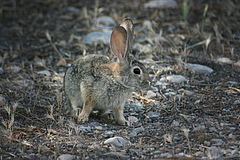 Jena. Coyote tobacco (Nicotiana attenuata) produces a potent neurotoxic substance: nicotine. The production of nicotine is regulated by plant hormones called jasmonates. Scientists at the Max Planck Institute for Chemical Ecology in Jena, Germany, the University of Bern, Switzerland, and Washington State University have now demonstrated the importance of jasmonate-dependent nicotine production for the survival of tobacco plants which are attacked by mammalian herbivores. Through experiments with genetically modified plants that are impaired in their ability to produce jasmonates, the researchers showed that jasmonate-deficiency strongly increases attacks by both insects and vertebrates.

Interestingly, insect attack did not significantly affect flower production and attacked plants were still able to produce seeds, whereas attack by herbivorous mammals had a strong negative impact on the plants’ reproductive ability. The scientists found that nicotine plays a crucial role in this context. Especially rabbits liked to peel the stems of nicotine-deficient plants, which strongly reduced flower production. However, when nicotine accumulates in the outer layers of the stem epidermis, it provides extremely effective protection against this type of damage. The study published in the journal eLife illustrates the importance of jasmonate-dependent defenses to provide protection against mammalian herbivores in nature.  (eLife, June 2016, DOI: 10.7554/eLife.13720). Involved was also Prof Ian T. Baldwin of MPI-CE, who is an iDiv member.