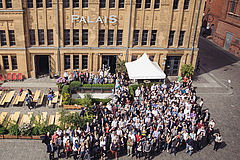 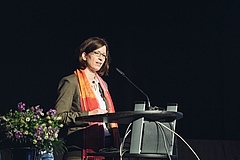 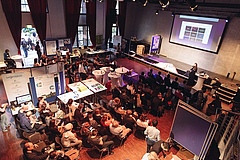 More than 350 participants from 29 countries, more than 100 talks, 99 posters, four discussion forums and more than 3.000 tweets – the first European Citizen Science Conference, which took place in Berlin from 19-21 Mai, was a major success. The conference focused on the innovation potential of Citizen Science for science, society and policy: How can modern and traditional forms of collaboration change scientific insights, promote the interface between science and policy, and create an added value for society? The conference brought together stakeholders from science, policy, and funding agencies, managers of Citizen Science projects, but also the Citizen Scientists themselves, among others members of the so-called Maker culture, whose members develop creative and cost-effective ideas to solve technical challenges. The conference was organized by the European Citizen Science Association (ECSA) in cooperation with the project Citizens Create Knowledge (GEWISS), which is hosted by UFZ/iDiv and the Natural History Museum Berlin. The conference was organized by Susanne Hecker and Prof. Aletta Bonn (both UFZ/FSU Jena/iDiv) together with 18 international partners. The participants could listen to talks, take part in workshops or visit poster presentations, but were also offered room for informal exchange during a public ThinkCamp and a Citizen Science festival at several locations in Berlin. Many specific Citizen Science activities were presented, not only projects from biology and nature conservation, but also from the social sciences. “I am thrilled with the very positive response and it is really important to place Citizen Science in the wider context of open science and participation to strengthen its innovation potential for science and society”, says Prof. Aletta Bonn, head of the Department Ecosystem Services at the UFZ and iDiv as well as member of ECSA’s executive board. “The spectrum of presentations has shown that Citizen Science is more than just a research approach”, adds Susanne Hecker “in Citizen Science projects real interdisciplinary can happen.” The goal of ECSA is to bundle Citizen Science activities on a European level and promote public participation in scientific research. The ECSA has been established around three years ago. Its ten principles of Citizen Science have so far been translated to about 20 languages. “Citizens have always been a driver for science. It is time to esteem their contributions and make them visible again”, says Prof. Johannes Vogel, ECSA president and head of the Natural History Museum Berlin. More information: http://www.ecsa2016.eu/ Project Citizens Create Knowledge (in German): www.buergerschaffenwissen.de
« back to Archive 2016
Share this site on: