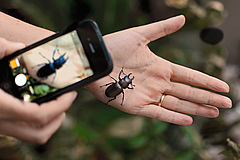 The European Citizen Science Association (ECSA) first international conference is being held in Berlin on 19-21 May. The aim of the conference is to discuss the innovative potential of citizen science for open science, society and policy. With over 320 participants from 29 countries the programme will see more than 100 talks in 14 sessions and open formats including an interactive marketplace, a ThinkCamp and a Citizen Science Fest. Attendees will learn about the latest developments and potential for citizens and scientist to collaboratively work together. The conference is hosted by the ‘Citizens create knowledge’ GEWISS project of the Helmholtz Centre for Environmental Research (UFZ), the German Centre for Integrative Biodiversity Research (iDiv) Leipzig-Halle-Jena, the Museum für Naturkunde Berlin.

The three-day conference showcases how both new and traditional ways of collaboration can transform scientific findings, enhance the science-policy interface and create social impact. Topics covered in the main sessions include:

·     the role of Citizen Science in EU environmental policy;

·     the role and application of technology in citizen science;

·     the potential for large scale monitoring of the environment & biological diversity;

“Citizen Science becomes a more and more accepted and valued approach – in science as well as in society and policy”, says Johannes Vogel, chair of ECSA and director of the Museum für Naturkunde Berlin where the executive board and secretariat of ECSA are hosted. “Citizen Science has developed into a global movement, visible through the different networks that have emerged and the formal Citizen Science Associations that have developed around the world. We are happy and proud to share so many successes and to welcome the international citizen science community to the capital of Germany.”

“This meeting celebrates the great achievements of the European Citizen Science Association within its first two years of establishment, as well as the global impact of this scientific approach”, says Aletta Bonn, chair of the ECSA conference committee and head of Department of Ecosystem Services at UFZ and iDiv. “Of particular importance is the role of citizen science in contributing to wider agendas such as open science as well as progress towards responsible research and innovation.”

As a special highlight of the event, the conference so invites the Berlin community to participate in a Friday evening Citizen Science Disco and a ThinkCamp and Citizen Science Fest on Saturday. The ThinkCamp is a unique “event-within-the-event”, to which the local Berlin grassroots science and maker communities are invited to collaborate together with conference attendees on a number of Citizen Science Challenges. The style is similar to a World Cafe, with an emphasis on providing an open and creative environment for working together on new ideas, Citizen Science projects, and technology platforms.

The European Citizen Science Association (ECSA) is a non-profit association set up to encourage the growth of the Citizen Science movement in Europe. ECSA was launched during the EU GREEN WEEK in June 2013 by the then EU Environment Commissioner Janez Potočnik and the now Chief Scientist United Nations Environmental Programme, Professor Jacqueline McGlade.   It is administered by a Secretariat hosted and mentored by the Museum für Naturkunde Berlin. From an informal network of researchers and communicators interested in Citizen Science, ECSA has grown into the European reference network of Citizen Science initiatives. It draws on 130+ individual and organizational members from over 28 countries, including EU member states, Switzerland, the U.S., Israel, Australia and New Zealand. Members represent a mixture of NGO’s, universities, research institutes, museums and other local and national Citizen Science groups and cover different fields, such as biological science, do-it-yourself approaches, environmental mapping and social sciences.