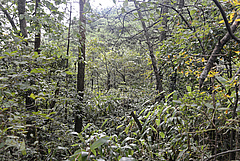 Many of the previous studies on global species diversity are inaccurate. These are the conclusions of an international research group, led by Martin Luther University Halle-Wittenberg (MLU) in collaboration with the German Centre for Integrative Biodiversity ResearchHalle - Jena - Leipzig (iDiv), which carried out a long-term study on biodiversity in the subtropical forests of China. The study shows that there might be an under- or overestimation of global biodiversity by up to 50 per cent when the survey is based on only a few taxa. The study’s findings were published in the journal “Nature Communications”.

The international research group “BEF-China” received funding from the German Research Foundation (DFG) for a period of eight years. Its aim was to determine the diversity of the species present in an ecosystem. “This presents a massive challenge, particularly for tropical and subtropical forest ecosystems that have a rich variety of species,” says Professor Helge Bruelheide from the Institute of Biology at MLU who led the research group. Even though the global diversity of plant species is well known, there are only a few studies that have attempted to record the variety of animal species – from the bugs found under bark to web-building spiders – as well as the plant species found in these forests. The tiny living creatures – such as the fungi and bacteria in the soil that are useful and harmful to plants – have often been disregarded. “All of these species are what makes up global biodiversity,” Bruelheide explains. This is why many of the studies investigating the scale of this biodiversity have only been speculation.

The international research team now has sound estimates in China about the number of species belonging to 43 different major taxa. These estimates are based on individual test plots as well as on an entire nature reserve. “A key feature of our project region is that it reflects the current situation of the earth’s forests better than the tropical lowland rainforests which have been the main focus of many studies up until now,” says Dr Andreas Schuldt from Leuphana University Lüneburg, the lead author of the study. “Forty-seven per cent of the humid tropical and subtropical forests occur in mountainous regions, a situation that is very similar to our project region. We can now assume that, in regions with different altitudes, slopes and solar orientation, species numbers increase at a different rate according to area than in lowland rain forests.” The majority of rainforest research has focused on the more accessible lowland rainforests. This new study underscores the necessity of carrying out more intensive investigations in the mountainous rainforests, says Schuldt.

Another new feature of this study is the way it combines traditional ways of determining species with modern methods of DNA analysis. This allows scientists to determine the number of bacteria and fungi taxa found in soil. This important contribution was made by Dr Tesfaye Wubet and Professor François Buscot from the Helmholtz Centre for Environmental Research (UFZ) in Halle. The team took a complete inventory of 27 sample plots in the Gutianshan National Nature Reserve in Zhejiang province west of Shanghai. The scientists were able to record in excess of 77,000 individuals from more than 1,000 plant and animal species, and 6,000 microorganism taxa.

Geobotanist Helge Bruelheide adds: “This work is an example of why long-term research is so essential. Studies such as this cannot be achieved within the usual funding period of three years. They require years of repeated investigations on numerous sample plots.” The numbers show that, according to the researchers’ projections, one ha of subtropical forest can capture around 38 per cent of all species while 10 ha can capture 76 per cent of the species. “This reveals the limited informational value of sample plots with very selective distribution globally,” says Bruelheide. The larger the area and the number of woody plants, i.e. trees and shrubs, the less precisely one can predict the overall diversity of other taxa.

Methods of spatial statistics were integrated into the study to lay the foundations for more precise future predictions about the number of species found in large areas, such as entire continents, based on environmental conditions.

MLU, iDiv Research Centre and UFZ were joined in the study by the universities of Lüneburg, Freiburg, Kiel und Leipzig in Germany, and the institutes of the Chinese Academy of Sciences in Beijing.

iDiv is a central facility of the University of Leipzig within the meaning of Section 92 (1) of the Act on AcademicFreedom in Higher Education in Saxony (Sächsisches Hoch-schulfreiheitsgesetz, SächsHSFG). It is run together with the Martin Luther University Halle-Wittenberg and the Friedrich Schiller University Jena, as well as in cooperation with the Helmholtz Centre for Environmental Research –UFZ.