Alarming state of our streams and rivers 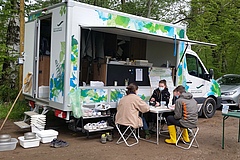 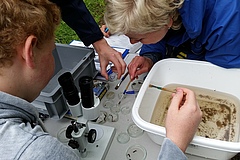 Speciation of aquatic organisms with the help of a binocular. (Picture: Julia von Gönner)

BUND, UFZ and iDiv are starting a citizen science project on stream monitoring

Berlin/Leipzig. The Friends of the Earth Germany (BUND), the Helmholtz Centre for Environmental Research (UFZ) and the German Centre for Integrative Biodiversity Research (iDiv) Halle-Jena-Leipzig are launching comprehensive monitoring of German rivers. The scientists want to study the pollution of smaller streams through pesticides and to record the effects on aquatic insect communities. The project aims to investigate the condition of German small water bodies in the long term and to promote biodiversity on this basis. Citizen scientists contribute to this process.