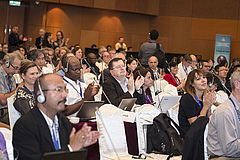 Delegates applause the approval of the SPM of the Thematic Assessment on Pollinators, Pollination and Food Production. Photo: IPBES

Kuala Lumpur. The assessments on pollinators, pollination and food production and the methodological assessment on scenario analysis and modelling have been adopted at the IPBES Fourth Plenary, which took place from 22nd – 28th February 2016, in Kuala Lumpur, Malaysia. Both assessments were co-coordinated by scientists and members of the German Centre for Integrative Biodiversity Research (iDiv) Halle-Jena-Leipzig.

Big gaps in data for biodiversity and ecosystem services

IPBES announced the completion of an assessment of scenarios and models that provide a new approach for helping policy makers evaluate the impacts of their decisions related to biodiversity and ecosystems services protection. The report, titled The Methodological Assessment of Scenarios and Models of Biodiversity and Ecosystem Services, was adopted by representatives of IPBES's 124 member nations. One of the coordinating lead authors (CLA) was Henrique M. Pereira of iDiv and Martin Luther University (MLU) Halle-Wittenberg.

The report describes how scenarios and models can help decision makers evaluate the future impacts of today's policies or management decisions. Examples include the use of scenarios and models to sustainably manage fisheries or to carry out land use planning that balances needs for development and biodiversity protection. The scenarios and models will help make better use of the IPBES regional and global assessments, including the new one about to be undertaken. The assessment was conducted by 83 experts and cited more than 3,000 scientific papers and, in two rounds of peer review, received 4,066 comments from 230 independent reviewers. “We show that scenarios comparing the consequences of different policy options for biodiversity and ecosystem services can be examined rigorously using available models. We also identify important data gaps on biodiversity change and point out important research directions for the scientific community.  With this report we provide the scientific basis for the global assessment to be carried out by IPBES, and ultimately for saving biodiversity in the future”, says Prof. Henrique Miguel Pereira, head of the research group Biodiversity Conservation at iDiv and MLU.

"Early outputs of IPBES have demonstrated the unique value of this platform. Proceeding with an updated global assessment through IPBES will help ensure that we have the best available knowledge to inform our collective efforts toward achieving the Global Goals for Sustainable Development”, says Achim Steiner, Executive Director of the United Nations Environment Programme (UNEP).

This report was adopted a few days after the thematic assessment of Pollinators, Pollination and Food Production. One of the editors and coordinating lead authors (CLA) for this report was iDiv member Josef Settele of the Helmholtz-Centre for Environmental Research (UFZ).

A growing number of pollinator species worldwide are being driven toward extinction by diverse pressures, many of them human-made, threatening millions of livelihoods and hundreds of billions of dollars worth of food supplies, according to the first global assessment of pollinators. However, the assessment, the result of a two-year study  accepted by the plenary of the Intergovernmental Science-Policy Platform on Biodiversity and Ecosystem Services (IPBES), on the 26th of Feb. 2016, also highlights a number of ways to effectively safeguard pollinator populations. Pollinated crops include those that provide fruit, vegetables, seeds, nuts and oils. Many of these are important dietary sources of vitamins and minerals, without which the risks of malnutrition might be expected to increase. Several crops also represent an important source of income in developing countries from, for example, the production of coffee and cocoa. Between US$235 billion and US$577 billion worth of annual global food production relies on direct contributions by pollinators.  Chocolate, for example, is derived from cacao tree seed (annual world cocoa bean crop value, US$5.7 billion). “75 % of the world's food crops depend at least in part on pollination. But it’s not only the bees, of which we globally have about 20.000 species. There are also many species of butterflies, moths, wasps, beetles, thrips, birds, bats and other vertebrates that contribute to pollination. These facts show: Pollinators are economically, socially and culturally important”, says PD Dr. Josef Settele of UFZ and iDiv.

"Pollination services are an 'agricultural input' that ensure the production of crops. All farmers, especially family farmers and smallholders around the world, benefit from these services. Improving pollinator density and diversity has a direct positive impact on crop yields, consequently promoting food and nutrition security. Hence, enhancing pollinator services is important for achieving the Sustainable Development Goals, as well as for helping family farmers' adaptation to climate change", says José Graziano da Silva, Director-General of the Food and Agriculture Organization of the United Nations (FAO).